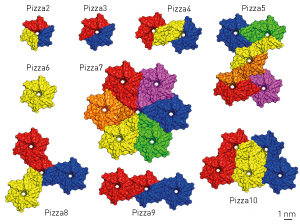 Investigating the structure of protein subunits and how they join together to form larger multi-unit proteins such as β-propellers can yield important insights into the evolution and activities of these proteins. It could also guide the design of new protein structures for use in biotechnology applications. Researchers at RIKEN and Yokohama City University have used a computational technique to deconstruct and re-engineer a family of proteins known as β-propellers1.

The β-propeller proteins are so called because they consist of several characteristic flat structures arranged in a propeller-like shape. Present-day β-propeller proteins are not symmetrical, having slightly different protein sequences in each ‘blade’ of the propeller. This asymmetry is generally believed to have emerged due to the duplication of a single gene, followed by the accumulation of mutations that created the variations in individual blades.

“Our goal was to reverse engineer this evolutionary process,” says Voet, one of the members of the research team at the RIKEN Center for Life Science Technologies. “We were trying to find what may be the ancestral sequence that could assemble into a perfectly symmetrical β-propeller.” Previous attempts to achieve this perfect symmetry had failed, but a new and rapid computational approach proved successful. The achievement supports the idea that modern β-propellers evolved by duplication and mutation of a common ancestral gene.

The researchers examined the amino acid sequences of many six-bladed β-propeller proteins listed in a protein data bank and used a computational process to predict the most likely ancestral amino acid sequence for all the proteins. They then used standard genetic engineering methods to produce the possible ancestral protein in Escherichia coli cells. The resulting protein molecules self-assembled into a perfectly symmetrical six-bladed propeller structure (Fig. 1).

The scientists called this protein pizza 6 due to the resemblance of each blade to a slice of pizza. “To our knowledge, this is the first perfectly symmetrical β-propeller protein to be produced synthetically,” explains Voet. Making and mixing modified versions of the protein blades yielded a variety of related structures with up to 42 blades. Voet likens the approach to snapping together building blocks to build new structures.

In addition to supporting theories of protein evolution, the insights gained through the synthesis and assembly of symmetrical β-propeller protein could lead to practical applications. “In future we could use our procedure to make proteins that assemble into bigger shapes for applications such as carrying drugs or recognizing cancer cells to deliver drug molecules,” says Voet.