Developmental control from an unexpected source 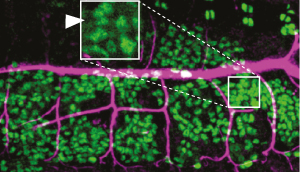 Figure 1: Expression of the Serp enzyme (magenta) in a fruit fly embryo. Serp is produced in the trachea and also in fat body cells (green), from which it is transported to the tracheal tubules. Reproduced from Ref. 1 and licensed under CC BY 3.0 © 2014 B. Dong et al.

Research from the RIKEN Center for Developmental Biology has revealed that development of the respiratory system in fruit flies is controlled by a regulatory enzyme that is manufactured in the fat body—the fly’s equivalent of the liver1. This finding supports the broad role of the fat body in supplying essential enzymes involved in embryonic development.

The development of organ systems involves signaling events that instruct cells to take the correct organ shape and produce and accumulate organ-specific molecules in the right place at the right time. This process is controlled by a variety of regulatory mechanisms. In the Drosophila fruit fly—a model organism widely used for developmental studies—development of the network of tubules forming the respiratory system, called the trachea, is controlled by the mixture of proteins and molecules such as polysaccharide chitin in the extracellular matrix. Just how the composition of the extracellular matrix is regulated, however, has been unclear.

One protein required for the development of the tracheal system is a chitin-modifying enzyme called serpentine (Serp). This protein is known to be secreted by tracheal cells and to play a key role in regulating tubule length. Shigeo Hayashi and his colleagues Bo Dong and Guangxia Miao have now shown that Serp is synthesized not only by tracheal cells but also in the organ known as the fat body, which is functionally equivalent to the liver in mammals.

Blocking the function of proteins that normally transport Serp out of fat body cells caused the protein to accumulate in that organ, while levels of Serp in the trachea fell. The observations indicate that the Serp made in the fat body is normally transported into tracheal cells across the epithelial barrier by a mechanism called transcytosis (Fig. 1).

To confirm that Serp is transferred from the fat body to the trachea, the researchers attempted to manipulate Serp expression in a small number of cells. “We used a laser heat shock technique to express Serp at a specific time and place,” explains Hayashi.

Using this technique, the researchers were able to turn on the expression of Serp in the fat body using a laser. In this way, they showed that Serp expressed in the fat body was transported to the tracheal tubules. The direct observation of this type of developmental mechanism, involving the secretion and inter-organ transfer of an essential enzyme, supports the essential role of the fat body in the development of multiple organs.