The universal nature of three-body attraction 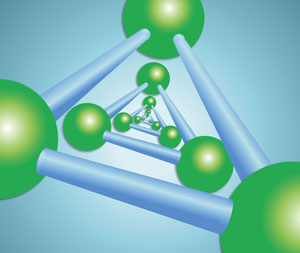 An exotic physical effect based on the attraction among three particles has a similar universality to that of common two-body interactions, Yusuke Horinouchi from the University of Tokyo and Masahito Ueda from the RIKEN Center for Emergent Matter Science have found1.

Many physical phenomena are based on the forces between two objects—the gravitational attraction between the Earth and the Sun, and the charge that keeps electrons circulating around an atomic nucleus. These two-body interactions are universal, allowing us to predict the behavior of multibody systems. The reverse is also generally true: if the force between two objects is too weak to form a stable system, no stable system can be formed by adding more objects.

Efimov states are predicted to occur in a wide range of systems, from groups of identical bosons to macromolecules such as DNA. They were first observed experimentally in 2006 in a gas of cold cesium atoms. Two parameters describe an Efimov state: the strength of the interaction between the particles and a parameter related to the low-energy ground state of the system. The interaction strength was previously found to be a universal parameter, independent of, for example, the type of atoms in a gas. In fact, a deeper universality also appears to be common for all Efimov states—with increasing energy the sizes of Efimov states always differ by a factor of 22.7 (Fig. 1).

To further study the properties of different Efimov systems, Ueda and Horinouchi used computer simulations to determine the energetics of systems based on different interaction forces, such as the force between atoms or the force inside an atomic nucleus. Using a method called functional renormalization-group analysis, they found that at low energies, the onset of the Efimov state is characterized by the same parameters irrespective of the system considered.

This commonality of both parameters describing Efimov systems suggests an unexpected and fundamental universality that could extend to even more complex systems, comments Ueda. “With our work, one can envisage that not just three-body phenomena but also related four-body or more-body phenomena may be universal.”