Flicking the switch on spin-driven devices 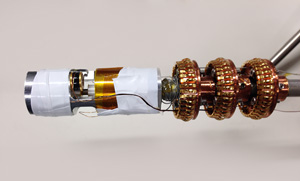 Figure 1: A device that compresses multiferroic crystals in one direction at cryogenic temperatures can be used to switch ‘spintronic’ activity on and off. © 2015 Taro Nakajima, RIKEN Center for Emergent Matter Science

By breaking the symmetry of ‘multiferroic’ crystals using a special compression cell, a team of RIKEN scientists has discovered a simple way to activate the material’s spin-based polarization1. The finding demonstrates that the stress of crystal deformation can impart a newfound degree of control over magnetic and electrical behavior in spintronic devices and sensors.

Multiferroic materials simultaneously show strong magnetic order, or ferromagnetism, and permanent electric polarization, or ferroelectricity. Recently, researchers have taken an interest in spin-driven ferroelectricity, where polarization effects are initiated at ultralow temperatures by changing the crystal’s internal symmetry. This effect, which is usually achieved by applying magnetic fields to a sample, has potent light-controlling and information-processing applications.

Taro Nakajima and colleagues from the RIKEN Center for Emergent Matter Science realized that multiferroic symmetry could also be controlled through a more primitive route. By applying pressure to the crystal in a direction that corresponds to a specific crystallographic axis, electron spins can be aligned to generate ferroelectric polarization. Most pressure cells, however, apply stress in all directions equally. “The biggest challenge we faced was accurately controlling uniaxial stress at temperatures as low as 3 kelvin,” says Nakajima.

The team constructed a unique cell that clamps a multiferroic barium cobalt germanium oxide (Ba2CoGe2O7) crystal between a pair of zirconium oxide pistons (Fig. 1). They then investigated how the sample’s electric polarization changed under uniaxial stress. In typical spin-driven ferroelectric experiments, the magnetic field causes polarization to rise to a single value when the temperature approaches absolute zero. In contrast, by deforming the Ba2CoGe2O7 crystal with varying levels of uniaxial stress, the researchers could tune the polarization output in unprecedented ways, from fully on to fully off, and many stages in between.

“These findings are exciting because they show we can control the spin-driven ferroelectricity in this compound by applying uniaxial stress at the low megapascal level,” notes Nakajima. “This is extremely weak compared to the gigapascal hydrostatic pressures normally used in condensed-matter physics, which are needed to control the superconducting transition temperature in materials such as cuprates.”

With this direct and effective method of tweaking multiferroic structures, the researchers anticipate that a variety of spin-driven ferroelectric behaviors will emerge in the future, particularly for crystals with high levels of symmetry. “Many multiferroic materials have the potential to show stress-induced effects, and have their ferroelectricity and ferromagnetism switched on or off easily,” says Nakajima. “This will have a large impact in our field.”