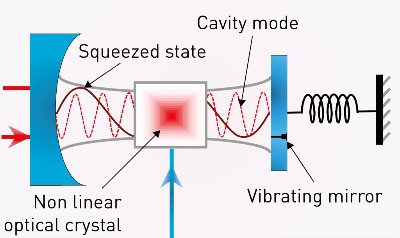 Figure 1: A vibrating mirror interacts with light inside a mirror-confined cavity. Adding a nonlinear optical crystal to the cavity creates a squeezed state of light that is coupled to the cavity modes and induces strong optomechanical coupling with the vibrating mirror with single-photon control. Adapted with permission from Ref. 1. Copyrighted by the American Physical Society.

An efficient optomechanical system utilizing ‘squeezed’ states of light has been designed by a RIKEN-led research team1. The scheme makes it possible to implement quantum processes based on single light particles, or photons, using currently available optomechanical technology, with potential applications in quantum computing and the study of exotic quantum effects.

Interactions involving single photons display many quantum physical phenomena. One of the more interesting effects is the coupling between photons and mechanical systems. Light carries a very small quantity of momentum, which can become noticeable when light interacts with micro- and nanoscale objects.

Researchers studying these optomechanical effects utilize the quantum physical effects arising from the interaction of tiny mirrors with light trapped in mirror-confined cavities. In such cavities, light bounces resonantly back and forth, which intensifies the normally weak interactions between light and the mechanical vibration of the mirrors. “Yet due to the intrinsically weak coupling between photons and the mechanical vibrations in current systems,” explains head researcher Franco Nori, “many of the expected effects have not yet been observed experimentally.”

The solution proposed by Nori and his colleagues from the RIKEN Center for Emergent Matter Science and RIKEN Interdisciplinary Theoretical Science Research Group, in collaboration with the Huazhong University of Science and Technology in China, involves the use of ‘squeezed’ states of light to strengthen optomechanical coupling. Squeezed states are those in which the energy and momentum of a photon are known with the maximum accuracy possible within the limits imposed by quantum physics. The researchers have demonstrated theoretically that such states can be generated by placing a nonlinear optical crystal into the mirror cavity and applying an external amplification scheme (Fig. 1).

This coupling, says Nori, is expected to open the door to studying complex nonlinear quantum effects. “Our scheme offers an alternative approach for controlling optomechanical systems by using a squeezed cavity mode, and is implementable using currently available optomechanical technology.”