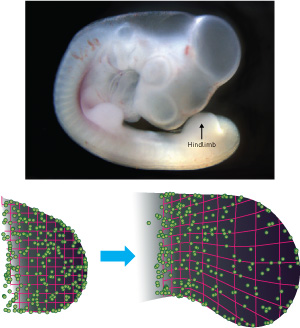 A comprehensive map of limb development in chick embryos by researchers from RIKEN and Nagoya University has uncovered tissue-level deformation patterns of organ development1. The findings reveal that the main driver of early limb formation is a global pattern of tissue stretching—and not spatial changes in organ volume, as previously believed.

“Our findings clearly refute the previous dominant model for limb elongation,” says Yoshihiro Morishita, a scientist at the RIKEN Quantitative Biology Center who teamed up with Atsushi Kuroiwa and Takayuki Suzuki of Nagoya University to undertake the developmental study.

The scientists took snapshots of a developing chick hindlimb using a simple technique based on fluorescence microscopy. They injected a fluorescent dye into the embryo to create ‘landmarks’ and then measured the positions of these points over 12-hour intervals before, during and after limb extension. Combining these pictures with a statistical method recently developed by Morishita and Suzuki, the researchers constructed accurate geometric maps of tissue dynamics (Fig. 1).

Analysis of the spatial and temporal patterns in the maps revealed three distinct growth modes. In the first growth mode, tissue growth was concentrated in the distal end of the developing hindlimb. It then moved to the posterior region, before shifting again to proximal and anterior locations during the later stages of development.

These tissue-level, macroscopic patterns were consistent with the molecular activities of cellular growth factors known to impact limb formation at a smaller scale. Furthermore, the researchers showed that directional tissue elongation, and not local cell proliferation, had the greatest impact on determining the final limb shape.

The techniques used by Morishita and his colleagues are not limited to the analysis of chick limbs. “These same methods could be used for other organisms and other organ systems,” Morishita says. “Because of the versatility of our method, we are trying to apply it to other systems.” Such systems include the developing brain and heart.

For now, these studies remain exploratory investigations into the basic rules of organ development. “However, over the long term,” Morishita says, “once the relationships among tissue-level morphogenetic processes, cellular behaviors and molecular activities have been quantitatively elucidated, we should be able to understand and predict mechanisms of malformations of organ morphologies.” This knowledge could eventually aid the treatment of organ disorders, either by revealing drug targets or by offering clues about how to build artificial organs in the laboratory.