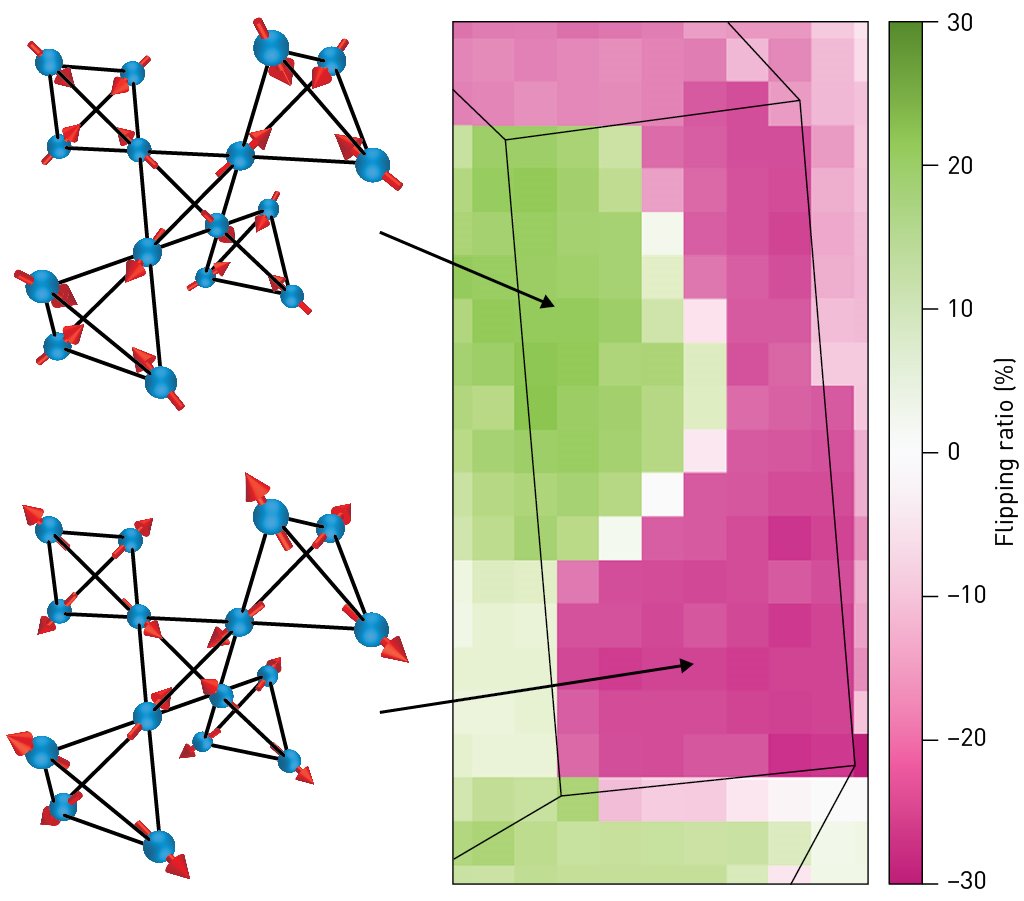 Figure 1: A new technique that applies different combinations of magnets to an osmium-based crystal can ‘flip’ regions of magnetic spin from one orientation to another (pink and green shading). Figure adapted with permission from Ref. 1. Copyrighted by the American Physical Society.

A RIKEN-led research team has stumbled on a remarkably simple way to flip the magnetic orientation of mirror-image magnetic domains in the unusual magnetic material pyrochlore1. This flipping technique also makes it possible to observe these domains precisely in real space, providing a new tool for exploring spin-based device applications.

Pyrochlore crystals have attracted the attention of physicists because of their unusual magnetic potential. These crystals consist of tetrahedral crystal units, where the electron spins at the four vertices are in a constant state of magnetic ‘frustration’ that results in multiple magnetic ground states.

Recently, researchers found evidence of ‘all-in/all-out’ configurations in pyrochlore lattices, where all four spins either point toward the center of the tetrahedron or away from it (Fig. 1). This arrangement breaks the magnetic frustration and produces only two ground states that are related by time-reversal symmetry. However, distinguishing the two types of magnetic domains is tricky because the all-in/all-out magnetic structure is an antiferromagnetic arrangement that does not respond to typical electronic and magnetic probes.

Taka-hisa Arima and his colleagues from the RIKEN SPring-8 Center and RIKEN Center for Emergent Matter Science, in collaboration with researchers from across Japan, realized that one way to spot these elusive twin domains is to examine the resonant scattering signal from polarized x-rays. In this technique, the energy of the incident x-ray can be tuned to resonate with a specific site, element or electronic transition of a material, making the technique ideal for locating magnetic symmetry transitions. By measuring the changes induced by right- and left-handed circularly polarized light using a low-temperature microdiffraction technique, the team deduced a ‘flipping ratio’ that identifies the local magnetic domain orientations.

When the researchers measured the flipping ratios of pyrochlore crystals of cadmium-osmium oxide (Cd2Os2O7) at the SPring-8 synchrotron radiation facility, they found that the domain structures were significantly affected just by cooling a sample near a permanent magnet. The existence of such a simple, reversible and controllable way to manipulate spins was a surprise. “Because the all-in/all-out structure cannot host any magnetization, almost no-one predicted that its magnetic domain could be controlled by a magnetic field,” notes Arima.

The researchers also suggest that this technique can image and control any type of pyrochlore with an all-in/all-out structure―not just Cd2Os2O7. “Recent theories predict that iridium oxide pyrochlore might have exotic electronic states along magnetic domain walls, as well as on its surface,” says Arima. “Our technique could provide quite useful information about these systems.”