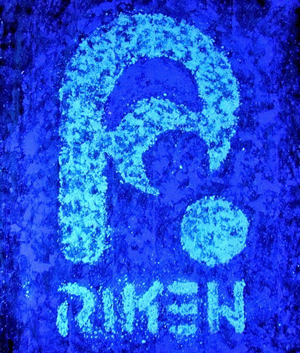 A chance observation led to RIKEN researchers discovering an organic compound whose fluorescence wavelength varies greatly when it is subjected to a mechanical force1. This property makes it an attractive material for various applications in security as well as medical imaging and therapy.

Shinichiro Kamino and Shuichi Enomoto of the RIKEN Center for Life Science Technologies, along with Atsuya Muranaka and colleagues from the RIKEN Center for Sustainable Resource Science and other scientists based in Japan, were studying some dyes when they noticed that a solid-state dye, cis-ABPX01, fluoresced at both near-infrared and blue frequencies. Subsequent spectroscopic and x-ray diffraction analysis indicated that this dual fluorescence stemmed from the two different crystal structures that the dye could adopt. The blue fluorescence came from a crystal arrangement of single molecules, whereas the near-infrared fluorescence originated from a configuration in which the repeating units consisted of two molecules joined together.

“This relationship between fluorescence and molecular structure inspired us to think that simple mechanical grinding might reduce the near-infrared fluorescence and enhance the blue fluorescence,” Kamino explains. Sure enough, the researchers observed this predicted change in fluorescence when they ground the mixture of structures in a mortar. By selectively grinding certain regions, they could produce areas with different fluorescence properties (Fig. 1).

The change also proved to be readily reversible: exposing the ground material to dichloromethane vapor restored the near-infrared fluorescence while reducing the blue fluorescence. Furthermore, this reversible switching could be repeated several times.

While other molecules have been discovered whose fluorescence properties vary on applying a mechanical force, the shift in fluorescence wavelength between near-infrared and blue light observed for cis-ABPX01 is considerably larger than that for other compounds. This remarkable dual fluorescence raises the possibility that cis-ABPX01 could be used as a component in signaling systems for a wide range of industrial, biological and medical applications.

The researchers plan to investigate using cis-ABPX01 and related molecules to detect medically significant changes in living systems. They are also interested exploring applications such as security tags whose optical properties change when they are subjected to mechanical tampering and other applications in which it is important to detect mechanical forces.