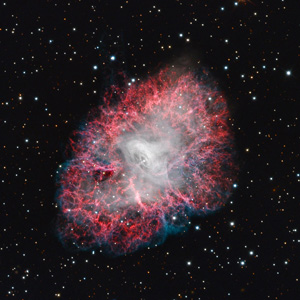 Figure 1: The Crab Nebula is powered by the Crab Pulsar, which produces a relativistic pulsar wind of electrons and positrons that flow out and expand the nebula. Here, the x-ray emission from the pulsar (white) is superimposed on the visible Crab Nebula (red). Credits: (pulsar image) NASA/ CXC/ SAO/ F. D. Seward, W. H. Tucker & R. A. Fesen; (nebula image) Adam Block/Mount Lemmon SkyCenter/University of Arizona

Simulations conducted by RIKEN researchers provide new insights into the remarkable physics operating at the heart of one of the Universe’s most fascinating objects—the pulsar1.

Almost a millennia ago, astronomers across Asia recorded the sudden but brief appearance of an extraordinarily bright star in the constellation Taurus. We now identify this event as the supernova that produced the Crab Nebula (Fig. 1). At the center of this nebula lies the remnant of the dead star responsible for the supernova—the Crab Pulsar. It is a rapidly spinning neutron star with a diameter of just 20 kilometers but is about 1.4 times more massive than our Sun.

The Crab Pulsar rotates 30 times a second, resulting in some exotic physical phenomena. These include a range of characteristic high-energy emissions similar to those generated by particle accelerators on Earth and an outflowing wind of particles traveling at close to the speed of light, which has produced much of the nebula we see today.

The wind is produced by the pulsar’s rotational energy being converted into kinetic energy, accelerating electrons and their antiparticles—positrons—to relativistic speeds. The pulsar wind suddenly ceases when it collides with the ‘termination shock’, a shock wave traveling in the opposite direction at about 0.3 light years from the pulsar. Since no radiation has yet been observed from the pulsar wind region, astrophysicists have had to rely heavily on theory to explain the physics involved.

By conducting numerical simulations, Yuto Teraki, Hirotaka Ito and Shigehiro Nagataki at the RIKEN Astrophysical Big Bang Laboratory have now shown that electrons and positrons can be accelerated to relativistic speeds in the pulsar wind without emitting radiation by resonant interaction with a peculiar type of electromagnetic wave, called superluminal strong waves, emitted by the spinning pulsar.

“Electrons and positrons are forced to resonate with the superluminal strong waves,” says Teraki. “For electrons traveling at highly relativistic speeds, the resonance condition is selective and depends on the angle between the particle and the wave vector. This is similar to cyclotron resonance, and results in the nearly linear acceleration of non-emitting, or non-thermal, particles, upstream of the termination shock.”

The selective acceleration of electrons and positrons by the pulsar wind may be a possible injection mechanism. “We did not know how many particles are accelerated at the termination shock of the Crab Nebula,” says Teraki. “The upstream superluminal strong waves acceleration is likely to be the mechanism that determines the injection rate.”