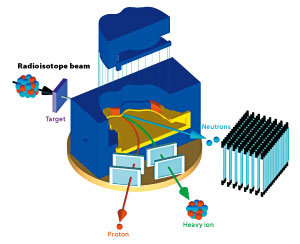 The mass of the neutron-rich oxygen nucleus 26O has been experimentally determined for the first time by a group led by researchers at the Tokyo Institute of Technology and RIKEN1. This measurement will aid theorists in their quest to develop more-accurate models of the nucleus.

Atomic nuclei appear deceptively simple, being made up of just two types of particles—electrically neutral neutrons and positive protons—held together by a single force, the strong nuclear force. But even after 70 years of study, scientists still have much to learn about nuclei because of the sheer complexity of these many-body quantum systems.

One question nuclear physicists are interested in is how many neutrons can be crammed into a nucleus before the nucleus becomes so unstable that it spits out a neutron (neutron decay).

So far, scientists have only managed to experimentally measure this property for light elements up to oxygen. For heavier nuclei, they have to rely on theoretical models of the nucleus. But even the most sophisticated models become inaccurate for large nuclei because of the many unknowns, such as the character of the nuclear interaction. Thus, experimental studies have a vital role to play in improving scientists’ understanding of the physics involved.

Now, Yosuke Kondo of the Tokyo Institute of Technology, with co-workers at the RIKEN Nishina Center for Accelerator-Based Science and other institutions, has measured the mass of the ground state of the oxygen isotope 26O using the recently commissioned SAMURAI spectrometer (Fig. 1) at the RIKEN Radioactive Isotope Beam Factory.

“Our measurements will help further develop nuclear theory and establish which effects are important,” says Kondo. “This understanding will provide more accurate prediction of the drip line in the higher mass region, which cannot be explored experimentally using current technology.”

The team is now examining more-challenging nuclei. “We have performed another experiment for the even more neutron-rich nuclei 27O and 28O, which had not been identified previously,” says Kondo.