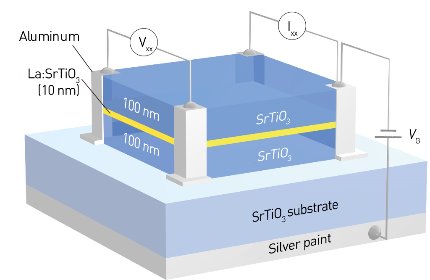 Nanometer-thin films made from strontium titanate (SrTiO3) are promising as platforms for next-generation electronics because, under the right fabrication conditions, they present high mobility and two-dimensional (2D) superconductivity simultaneously. A RIKEN team has now demonstrated that this metal oxide also exhibits unique quantum behavior when precisely doped with rare-earth lanthanum atoms1.

Applying a strong, perpendicular magnetic field to electrons flowing through circuits causes them to deviate from their normal straight paths. Known as the Hall effect, this phenomenon takes on different characteristics in the case of 2D electrons—the deflected electrons have quantized conductivity with values that are universal, even between different materials. Such quantum Hall effects can lead to swirling, vortex-like states that could serve as fundamental quantum bits for quantum computing.

But, it is challenging to observe the quantum Hall effect in SrTiO3 thin films because the material is naturally insulating. While this can be countered by adding metallic dopant atoms to the metal oxide, confining high concentrations of dopants in 2D thin films causes the charge carriers to move too sluggishly to display quantum behavior.

“Realizing the quantum Hall effect imposes restrictions on carrier densities in SrTiO3,” says Kei Takahashi of the RIKEN Center for Emergent Matter Science. “However, most prepared samples turn out to be non-metallic. To overcome such problems, we developed a new deposition system.”

Takahashi and his colleagues used molecular-beam epitaxy to produce high-quality SrTiO3 thin films. This technique grows the oxide one atomic layer at a time by shooting gaseous beams of organic and metallic precursors on to a target substrate held at 1,200 degrees Celsius. The team substituted lanthanum atoms for strontium ones into a nanoscale layer as ‘delta-doping’ (Fig. 1) to confine the electron carriers in two dimensions.

Subsequent transport measurements produced the first observation of quantum Hall effects in SrTiO3 materials, thanks to the low-density but high-mobility dopant layer.

The signatures of quantized conductance through this system, however, were peculiar—instead of regular, stepwise jumps of quantized Hall conductance under higher magnetic fields, the team saw unevenly distributed plateaus that appeared or disappeared at different dopant concentrations.

Takahashi explains that this unusual quantum Hall behavior of SrTiO3 arises from the contribution of so-called d-type electron orbitals that are more localized—and hence better correlated into a network—than carriers in silicon and gallium arsenide semiconductors.

“It might be easy to make collaborations between the quantum Hall effects of SrTiO3 and its other exotic behaviors,” he notes.