Getting to the root of nitrite toxicity 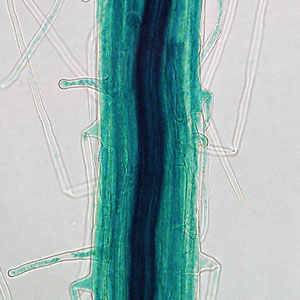 Figure 1: A root of an Arabidopsis plant grown on nitrite shows the expression of RFNR2 (blue stain). Reproduced, with permission, from Ref. 1 © 2016 Oxford University Press/Japanese Society of Plant Physiologists

A gene that enables plants to cope with the toxic compound nitrite has been identified by RIKEN researchers1. This finding is a first step toward understanding how plants respond to nitrite.

“We know exposure to nitrite stunts plant growth, but we don’t really know how it is toxic to plants,” says Takushi Hachiya of the RIKEN Center for Sustainable Resource Science. “There’s very little information about its concentration in soil,” he adds, noting that extensive use of nitrogen fertilizers may transiently cause toxic levels of nitrite.

To understand how plants deal with this toxic compound, a team led by Hachiya and Hitoshi Sakakibara investigated two genes, RFNR1 and RFNR2, which are induced more strongly in response to nitrite than other forms of nitrogen.

The researchers grew mutants with a defective copy of either gene on different nitrogen sources and assessed their responses. While mutants lacking RFNR1 grew similarly to normal plants, those with a defective copy of RFNR2 responded differently to the various nitrogen sources—they developed normally on a medium containing ammonium or nitrate, but suffered on exposure to even low concentrations of nitrite, forming shorter, slower-growing roots.

In a parallel experiment, the researchers showed that RFNR2 is normally switched on in plants grown on nitrite (Fig. 1).

While these experiments showed that plants need RFNR2 to cope with nitrite, they did not clarify its precise role—the mutants may have grown poorly on nitrite because of its toxicity or because they were unable to use it as a source of nitrogen.

To test these alternatives, the team grew the mutants on a nitrite medium supplemented with nitrate or ammonium. Despite the availability of alternative nitrogen sources, the plants still grew poorly. Measurements revealed high levels of nitrite in the mutant plants, but not in normal plants, reinforcing the conclusion that the mutants were suffering from nitrite toxicity.

While nitrite is toxic to plants lacking RFNR2, previous research by other groups has revealed that plants use the NRT2 gene to take up nitrite from the soil, suggesting that it may serve as an alternative nitrogen source.

“Most nitrogen researchers think nitrite isn’t an important nutrient because its concentration in the soil is generally low,” says Hachiya. “However, very low concentrations of nitrite can act as a signal, altering gene expression and affecting plant growth.”

Hachiya, who has recently moved to Nagoya University, hopes to unravel the genetic network involved in nitrite metabolism, from detoxification genes acting with RFNR2 to additional nitrite transporters.