A both/and approach to creating polymers 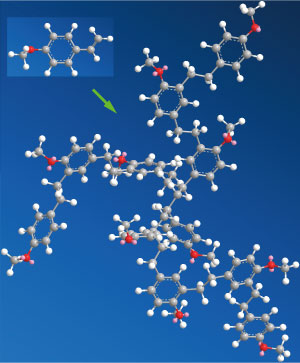 Polymers with unique structures that could be used in applications ranging from coatings to electronic devices have been produced by RIKEN researchers1. By combining two types of polymerization reactions in a single pot and using a rare-earth catalyst, the researchers produced polymers that are both highly branched and highly ordered.

Polymers are large molecules made by linking together lots of small ‘monomer’ molecules in a repeating pattern. For example, the everyday plastic polyethylene is formed by connecting small ethylene monomers (CH2=CH2) together in a chain.

Now, Zhaomin Hou from the RIKEN Center for Sustainable Resource Science and colleagues have developed a catalyst that has the rare ability of inducing certain monomers to undergo both chain-growth and step-growth polymerizations.

“Cationic rare-earth metal alkyl complexes are highly active catalysts toward both C–H activation and C=C double-bond insertion,” Hou explains. “The special catalytic activity of these catalysts for this transformation springs from the strong affinity of rare-earth metal ions for oxygen, which facilitates the interaction between the catalyst and the anisole unit.”

The resulting polymers are unique, Hou adds. “The products contain multiple branches composed of perfectly alternating polar (anisole) and non-polar (ethylene) sequences (Fig. 1), which may find applications in areas such as coatings, polymer electrolytes and nanoscience.”

Having demonstrated the feasibility of combining chain-growth and step-growth polymerizations in one pot, the team is keen to explore other possible examples. “This work demonstrates that rare-earth metal-catalyzed C−H activation and C=C double bond insertion may provide unique opportunities for constructing novel polymer architectures that are difficult to make by other means,” says Hou. “We will continue to use this strategy to synthesize new functional polymers.”