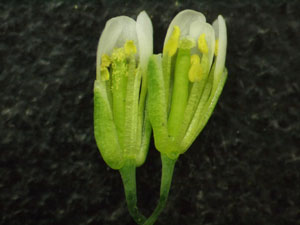 Two members of a protein family known for their roles in shuttling sugar around plants are also involved in the transport of a vital hormone, a team of researchers at RIKEN find1. This discovery provides a new glimpse into the complex physiological processes of plant development. It also promises to give scientists more control over such processes.

Now, a team led by Mitsunori Seo at the RIKEN Center for Sustainable Resource Science has discovered an exception to this rule. By expressing two proteins from the family of SWEET proteins—so named because they transport sugars—in yeast and egg cells in culture, Seo and his co-workers found that the proteins also transport gibberellin, a plant hormone that both regulates growth and affects various developmental processes.

Seo and his team discovered that the SWEET proteins AtSWEET13 and AtSWEET14 are found throughout the plant Arabidopsis, being particularly prevalent in the stems, roots, leaves, seeds and anthers (sac-like structures that produce pollen).

The scientists also found that mutant plants in which the genes encoding the two proteins were removed have less transport of gibberellin. Using these mutant plants, they showed that the transporters are essential for many aspects of plant growth and development. In particular, the anthers of the mutant plants showed developmental defects resembling those in gibberellin-deficient plants; these defects resulted in reduced pollination (Fig. 1). However, the same plants responded positively to gibberellin during seed development, germination and growth. “This suggests that AtSWEET13 and AtSWEET14 can regulate gibberellin-mediated physiological responses positively and negatively depending on when and where they are expressed,” explains Seo.

SWEET proteins are very versatile, exhibiting diverse functions in transporting a range of sugars to various parts of a plant, from developing seeds to roots and leaves. The finding that these proteins can also interact with gibberellin adds another dimension to this multifunctionality. “It is interesting to think about how the multifunctionality of SWEET proteins has evolved,” comments Seo.