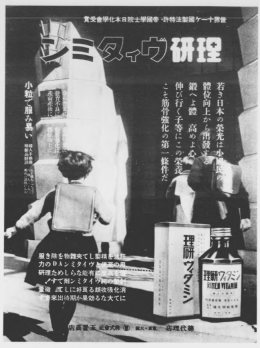 The benefits to the human body of vitamins—organic compounds organisms need in small amounts for their nutritional value—are well-known today, as demonstrated by the many dietery supplements on the market. In the early 20th century, however, the term "vitamin" had not yet even been coined, and there remained a great deal of mystery surrounding the existence of such compounds.

Japanese researcher Umetaro Suzuki, the father of vitamin research in Japan, was the earliest to identify a vitamin with his discovery in 1910 of aberic acid, today known as vitamin B1. The importance of nutrients in preventing beriberi, a nervous system ailment caused by a deficiency in the vitamin, had been recognized earlier, but Suzuki was the first to isolate B1 as the key nutrient for preventing the disease. Suzuki published his finding in a Japanese journal and patented the invention. For his work, Suzuki was awarded the Culture Order and, later, the First Class Order of the Sacred Treasure by the Emperor.

Suzuki's contribution to vitamin research, however, did not end with B1. Working at RIKEN as Director of the Chemistry Division with his pupil Dr. Katsumi Takahashi, Dr. Suzuki later succeeded in isolating and extracting vitamin A from cod liver oil. He also invented a type of synthetic sake, RIKEN-Shu, which differed from traditional sake in that it was made from materials other than rice and needed no preservatives. The patenting of these and other inventions sparked a vitamin boom in Japan, generated enough income to support all of RIKEN, and led to the establishment of RIKEN Vitamin, Ltd. Co., a company which still exists today. With all his contributions, Umetaro Suzuki laid the foundations for vitamin research in Japan.