Messages from the President

Greetings at the Start of the New Year

I wish you a happy and prosperous New Year.

For the past three years, our society and economy have responded to the successive waves of new variants of the coronavirus, resisted the pandemic, and adapted to challenges by adopting new approaches and lifestyles. Science has demonstrated its potency to meet these challenges through online conferences and other novel communication tools, as well as by speedily developing new vaccines. Yet on the other hand, to the consternation of us all, global warming is proceeding apace, showing its effects even in our gardens and roadside shrubbery. Changes have clearly reached the point where we can no longer turn our backs on this “inconvenient truth.” Even worse, though we thought history had turned a page on armed conflicts, they are breaking out even between nations with fully developed scientific technologies and cultures. The latest scientific findings are being put to use in weaponry, and mediated by outer-space-based planetary telecommunications systems, amalgams of information and misinformation have turned cyberspace into a new battlefield.

All of these harsh realities result from the activities of homo sapiens; thus it is incumbent upon us to find solutions. It is the responsibility of our generation, living in the present age, not to pass on to succeeding generations the disorder and dilemmas we have created. The 20th century was the great age of science, and scientific advancement and technological innovation are marching onward, even now. And yet can we say that we control and are making good use of our power? Facing the future with our eyes open, we must obtain a comprehensive overall grasp of everything we know, and through analysis, restructure it; we must identify new and promising realms where persistent efforts will enhance our knowledge and enrich our understanding.

RIKEN is Japan's premier scientific research institute with a globally recognized standard of comprehensive scope extending across and beyond the basic sciences. Since its founding, it has channeled scientists’ curiosity and energies into investigations of the unknown, spurning the confines and limitations of established fields, spurring on scientists to engage preferentially in fields destined to make useful contributions to people’s daily lives.

When I became president of RIKEN in April of 2022, I asked myself whether the following wouldn’t be RIKEN’s best stance: “To do research in areas where the researchers themselves want to find answers, research fields overlapping with knowledge creation needed to secure humanity’s future – in other words, research making RIKEN a place where science and society deepen their mutual trust and engagement”; in this spirit, I announced my aspiration to rekindle the RIKEN spirit through closer examination of the organization’s tradition. And in this spirit, to frame an action plan that would, so to speak, fly a new banner and lead us in the right direction, I published, last August, RIKEN’s Vision on the 2030 Horizon. This year, guided by its principles, I hope to embark on this path.

I have encapsulated its key points below.

At COP26 in Glasgow in November 2021, an international agreement was reached to cap the earth’s post-industrial-revolution atmospheric temperature rise at 1.5 degrees Celsius. In November 2022, when COP27 met at Sharm El Sheikh in Egypt, energy and food crises in the wake of war and the COVID-19 pandemic had already aggravated the situation. The 1.5 degree cap was retained, despite heated debate: to some parties, global environmental concerns seem less urgent than sustaining their countries’ current standard of living. The intricacies of this argument exemplify the tremendous difficulty of achieving cooperation among all the constituent parties to protect shared resources, even when everyone is clearly aware that the earth is humanity’s sole and irreplaceable commons.

When the scale of common property is small, so is the number of users, and few attempt to “get a free ride”; the commons can be defended. But the larger the scale, the harder it becomes to establish a system of rules to prevent some users from breaking the rules with impunity and taking “free rides”; the commons falls apart under a brand of economic rationalism where users demand maximum benefits from minimum efforts. This is what is called “the tragedy of the commons” in economic parlance. Does that then mean it is impossible to protect the global commons on a planetary scale? I believe that shared resources can be protected; the solution lies in the latent power of digital innovation coming from cyberspace’s progressive integration with the real world. It is possible to create arrangements that encourage transformations of behavior – provided the manner in which individual behaviors will affect other individuals and the world as a whole can be grasped using realtime data in a climate of scientifically supported trust.

Real-world phenomena and events of all kinds are now, one after another, being instantly converted to digital form and stored as data in cyberspace. In our daily lives ever more situations are arising where, thanks to the Internet, these data subsequently can be used in real time. Would it not be possible to overcome the tragedy of the global commons if any person at any time had access to reliable quality data and could analyze and apply data using advanced computational predictive science, transiting cyberspace and the real world back and forth freely, always fully aware of any action’s effects on other parties?

Such an open environment might also accelerate the pace of the most advanced R&D. An important first step is to collect and properly organize reliable, high-quality data. We hope both to build the world’s very best facilities and measuring instruments, those that generate our signature unparalleled and irreplaceable datasets, and to systematically set up sharing arrangements for their widest possible use. To make further progress in artificial intelligence (AI) and its underlying mathematical sciences in order to analyze data inductively will be of crucial importance. Fugaku, RIKEN’s computational science platform boasting the world’s highest computation speeds, has made it possible to perform calculations that were hitherto impossible as well as to work out solutions to complicated problems on larger scales than ever before. Its successor, Fugaku NEXT, has taken up the challenge of further computable range expansion; in the development of quantum computing, which has drawn so much attention in recent years, RIKEN has also taken on a central role by bringing Japan’s first made-in-Japan quantum computer very close to completion. RIKEN has even moved to achieve leadership in the rapidly advancing frontier zone of quantum-classical hybrid computing by creating linkages at multiple levels between quantum computers and supercomputers. Through ever-higher-level computational science and realtime big data analysis and prediction, feedback with updated data will permit control of future events and open new horizons.

The concept styled “TRIP” – Transformative Research Innovation Platform of RIKEN platforms – engages to the full all of RIKEN’s synergistic capabilities, linking its every subunit to pursue research at unprecedented levels. The TRIP plan is to construct a “platform of platforms” as only RIKEN can: by marshaling its globally renowned lineup of state-of-the-art research resources with the aim of transcending existing fields and paradigms to unify the sciences and open the door to new spheres of knowledge; by so doing it will generate advanced data, pioneer novel analytical methods in the most advanced AI and mathematical sciences, and create linkages across the twin axes of supercomputing and quantum computing in advanced computational science.

In order to ensure continuous advancement in basic sciences research, the most fundamental consideration is to train young researchers to take on this task. RIKEN has consistently fostered researchers’ careers at all levels, whether they be undergraduate students, graduate students, post-docs, or young principal investigators. RIKEN Hakubi Fellows Program for young principal investigators is part of RIKEN’s “brains without borders” support for international exchange among exceptionally talented individuals, whether Japanese or of other nationalities. We are further upgrading this program to make it a key artery for global exchange in research talent and ideas. We want RIKEN fellows to feel secure in their research environment, so that their talents as researchers will blossom and as colleagues they will forge tight post-fellowship ties, making RIKEN a worldwide web of lasting research alliances. To this end, we intend to make our human resources and researcher support programs ever better and stronger. By brightening researchers’ lives and career prospects, we hope to attract and retain worthy next-generation research experts.

Using pioneering research digital transformation (“DX”) to protect Earth as a global commons means motivating people to be broad-mindedly active in ways that will produce new growth opportunities. RIKEN wants to encourage supportive arrangements of this type. RIKEN is planning to unveil a made-in-Japan gate-based superconducting quantum computer in March 2023. Recently, in the context of semiconductor industry joint Japan-US policy discussions aimed at reviving Japan’s semiconductor industry, a basis was established for mass production and R&D of next-generation semiconductors “beyond 2 nm.” RIKEN is a driver of this R&D campaign and is marked to provide cutting-edge solutions needed to make next-generation semiconductors.

Our desire to contribute to making our planet’s and humanity’s futures brighter is renewed in our New Year’s resolution: to do everything that RIKEN and only RIKEN can do to carry out outstanding research whose excellence will give science and technology a new birth of progress.

As Japan’s premier incorporated national research and development agency, we intend to continue our best efforts to assist Japan in playing a solid and steadfast role in international society. We hope to enlist your strong support for RIKEN in the New Year. 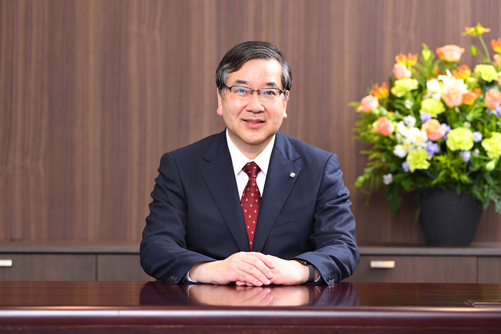