The magnetic field of spin-orbitronics 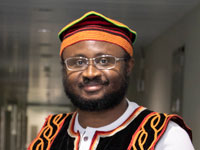 I’m a postdoctoral researcher in the Spin Physics Theory Research Team at the RIKEN Center for Emergent Matter Science (CEMS), led by Professor Gen Tatara. I seek to theoretically explore new directions in an emerging field called spin-orbitronics, in which scientists seek to exploit the interplay of electron charge and spin in the presence of ‘spin–orbit interactions’, the results of which could have potential appliations to microelectronic devices.

What sparked your interest in your field?

I have been fascinated by magnets since high school. However, I chose to pursue my undergraduate studies in mathematics with a minor in computer science at the University of Buea in Cameroon, located at the foot of the beautiful 4,040 meter-high Mount Cameroon. This decision was motivated partly due to my love for mathematics as well as the fact that it would keep me open to varied career options. However, I took about 85% of my elective courses in physics. I was introduced to the concept spintronics during my days as graduate student in Theoretical Physics at the African University of Science and Technology, Abuja, Nigeria.

I use mathematical equations to explain the behavior of tiny magnets and magnetic heterostructures at very short length and time scales.

In particular, I employ 'spin gauge field theory' to investigate how the interplay of spin–orbit interactions, charge and the spin of electrons influence transport in novel magnetic textures, such as domain walls and skyrmions. I’m also interested in the nature of magnetization dissipation in anti-ferromagnetic systems with broken inversion symmetry.

One fascinating prospect is the use of spin–orbit interaction (and related effects) to manipulate magnetic states at very short lengths to create smart, high-density, high-efficiency and low power-consuming data storage and memory technologies. Even more enchanting is the possibility of incorporating naturally abundant antiferromagnets—characterized by ultrafast dynamics—into these technologies to govern aspects such as transport properties. 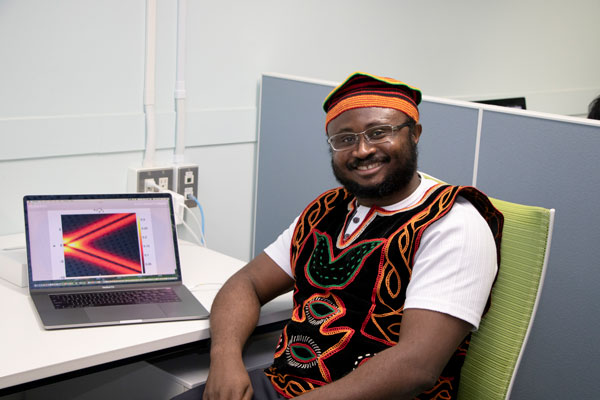 When did you join RIKEN?

I joined RIKEN in April 2017, a few months after the completion of my PhD. During my studies, I had read a lot of interesting research papers by Professor Tatara. I contacted him a couple of months before my PhD defense to express a desire to join his group. I was extremely impressed with the humility and simplicity of his response.

My first attendance of a CEMS weekly group meeting focused on skyrmions. Walking into a 100-capacity room filled with leaders in spintronics discussing fundamental concepts and their latest experimental observations was one of the most intimidating, yet motivating, experiences I’ve had.