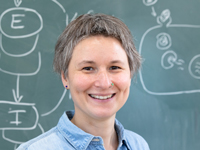 I first joined RIKEN in 2016 as a senior visiting scientist at iTHES, the predecessor of the Interdisciplinary Theoretical and Mathematical Sciences (iTHEMS) program. In 2020, I became one of four iTHEMS deputy program directors. I am in a field I call ‘virophysics’; the application of physics methods to virology. Primarily, I construct computer and mathematical models to explain the experimental observations made when viruses infect cell cultures. In biology, such knowledge is usually advanced through experimental trial and error, but physics modeling can help streamline this process.

As an undergraduate in computational physics, I became interested in self-organizing systems and distributed intelligence. As a graduate student, I intended to work on social insect behavior, but my doctoral advisor wanted me to work with him on cancer. He gave me a paper called Immunology for physicists. Reading it, I became fascinated by how our immune system learns about new pathogens and retains that memory over a long time. Coincidentally, this happened around 2003, when the original SARS virus (SARS-CoV-1) hit China, Canada and other countries. The mathematical models in the papers I was reading always assumed that a cell close to an infected cell sees the same amount of virus as one that is far away. In my first research project I constructed a simple, spatial model for the spread of a respiratory virus infection to show how local effects impact cell-to-cell virus spread, and the immune response. There was very little known about SARS-CoV-1 at that time, so I decided to construct my first model based on the influenza virus. I didn’t know that influenza would become important due to the possibility of an avian influenza pandemic, which remains a threat today. 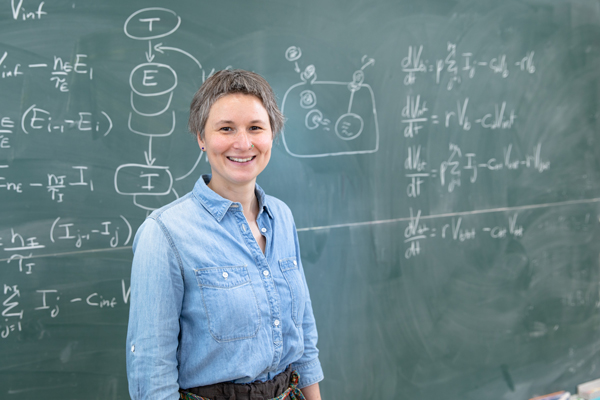 My research is important to society because…

Let’s say we want to determine the time between giving two doses of a vaccine to confer optimal protection. In immunology or virology, this is done by testing different dosing intervals in as many people as possible, and then we can choose only from the options that were tested. Without equations, we cannot predict what happens if the interval is longer or shorter, because the system is complex and the response is nonlinear. My research is developing physics-based equations that accurately predict what happens between and beyond the scenarios tested.

The iTHEMS program was designed to stimulate interdisciplinary collaborations. There are many seminars on topics ranging from physics to biology and mathematics to information theory. We have informal, iTHEMS-wide seminars and coffee meetings on many of these topics. At these meetings, new ideas and perspectives emerge, and we exchange skills and techniques across fields.