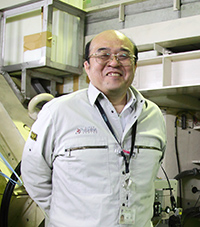 As a child, I enjoyed observing the Moon, and I remember building a radio using a germanium diode. But what really got me interested in science was when I took physics in high school. I found it fascinating that the world could be described so precisely using mathematics. I recall using an experimental device, often called ‘the monkey and the hunter’, in which a target is dropped at the same instant a ball is fired directly at it. The ball ends up hitting the target a 100 per cent of the time.

But science didn’t prove to be a smooth path for me. As an undergraduate student majoring in physics, there were lots of things I didn’t understand, especially in the areas of electromagnetism and quantum mechanics. Also, I was on the judo team, and the chokeholds must have been killing my brain cells, because I felt like I was getting dumber and dumber. I managed to get into graduate school and completed the coursework, but I wasn’t able to finish my thesis—I just couldn’t get it on paper.

How did you end up working on superheavy elements?

I didn’t feel qualified to become a full-fledged physicist, but I was really interested in nuclear physics, so I decided to join RIKEN. At the time, there were plans to conduct experiments on superheavy elements using the ring cyclotron that was under construction.

How did you discover element 113?

In 1987, I built a new device called the gas-filled recoil ion separator (GARIS), which we first used to create elements that other groups had already found. Then we started working on element 113, the first in line of undiscovered elements in the periodic table. But it took more than 11 years for us to find conclusive evidence of its existence.

From a nuclear physics perspective, our work might not be tremendously interesting because we discovered only one of 3,000 nuclides observed so far. But from the viewpoint of chemistry, it is very important, since we are filling in one of maybe only 173 spaces in the periodic table. Fewer than 120 elements have been discovered so far. The discovery of element 113 is also symbolically important because it is the first element to be discovered in Asia.

Is it true that before the discovery you would always give an offering of 113 yen when visiting shrines?

Yes. I wanted to do everything humanly possible to get credit for the element.

What will be your next challenge?

I’d like to go after even heavier elements like 119 and 120, but we will have to use a different process known as hot fusion.

In a sense, we are doing what the early alchemists were trying to do. In fact, Ernest Rutherford, the New Zealand-born chemist who confirmed the existence of the atomic nucleus in 1911, used to say in his lectures that chemists had finally achieved what alchemists had always wanted to do.

This is an edited excerpt of an interview with Kosuke Morita first published in RIKEN’s internal newsletter,RIKENETIC.