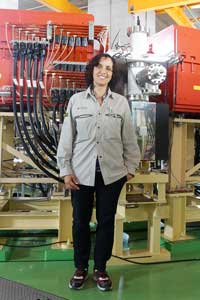 I seek new and creative ways to answer fundamental questions in nuclear astrophysics. An auxiliary goal is to introduce a culture of using mass spectroscopy for nuclear physics research at RIKEN. Japan has only recently begun applying this technique to research in nuclear physics—largely through the initiatives of the Radioactive Isotope Beam Factory (RIBF) at RIKEN. I have worked in the area for almost 10 years at large facilities in France, Switzerland and Germany.

I measure the masses of short-lived nuclei. RIBF’s Rare-RI Ring—a storage ring for circulating radioactive isotopes—can measure the masses of these exotic nuclei in less than 1 millisecond, which is more than 100 times faster than the time it takes you to blink. Exotic isotopes played a major role in the formation of chemical elements found on Earth today. They were cooked in the most efficient pots in the Universe—the stars. Their properties, especially their masses, are very important ingredients for understanding how they were cooked. In a way, I am trying to understand the taste of life.

I always wanted to study astrophysics, but I didn’t know how to contribute to this vast field. I first tried astrochemistry, and then I tested theory. Eventually, I landed in a nuclear physics laboratory while at the ISOLDE radioactive isotope beam factory in CERN (European Organization for Nuclear Research), Switzerland. I loved the experience and settled on experimental nuclear physics.

I am amazed by how the smallest bound object—the nucleus—and the energy it carries (which is nothing more than its mass, based on Einstein’s famous equation E = mc2) has brought life to the Universe.

The stars have always fascinated me. As a teenager, I would spend long summer nights gazing at the stars in the clear Algerian sky. I was convinced that there was something up there related to our origin. Becoming a scientist was the only way to discover the mysteries of our Universe. It was the only thing I wanted to be.

What has been the most interesting discovery in your field in recent years?

RIKEN is a very stimulating environment. It also has very high expectations in terms of research output, which pushes researchers to venture into the unknown. At the same time, we receive a lot of support for our explorations.

How do you balance your personal and professional lives?

I remind myself everyday of my goals: I want to enjoy life while also engaging in bold research.