Nonlinear optical microscopes utilizing near infrared light is optimal for making observation on deep parts of biological samples in which light tends to scatter. Normally, only the area around the focusing point can be observed as signal light is generated around at the focus using the objective lens, and tomogram images are taken by moving this focusing point.

However, as the observed part becomes deeper, optical loss grows due to absorption or scattering and light generated at areas other than the focusing point (background light) acts as noise, making observation difficult, since nonlinear phenomenon is induced not only at the focusing point but also on the sample surface. Furthermore, spatial resolution is reduced in principle, due to reasons including the use of near infrared light which has approximately twice the wavelength of visible light and use of it at a low effective numerical aperture.

The intensity of signal light generated by nonlinear 2-wavelength excitation optical processes such as 2-photon absorption, 2-photon fluorescence, sum-frequency generation, difference frequency generation and stimulated Raman scattering is proportional to the product of the intensities of the 2 wavelength pulses, and is induced by the temporal and spatial overlapping of the 2 wavelength pulses. By modulating the spatial overlap of 2 wavelength pulses, it is possible to induce intensity modulation in the signal light generated. This intensity modulation reaches largest on the focal plane in the optical axis direction and becomes smaller as it is farther away from the focal plane. In addition, the frequency characteristics of the modulated signal light intensity vary as the position shifts from the center of the focal spot toward the outer areas.

The new microscopy "SPOMNOM" uses 2 wavelength pulse lasers as the light sources, with one optical pulse laser fixed and the other given relative position modulation at a specified frequency so that intensity modulation is induced only in the signal light generated around the focusing point and the generated signal light is lock-in detected with modulation frequency. It enables suppression of the background signal generated in areas other than the focusing point (background light) and observation of deeper parts. Furthermore, spatial resolution is improved as the detected signal is generated from an area smaller than the focal spot. 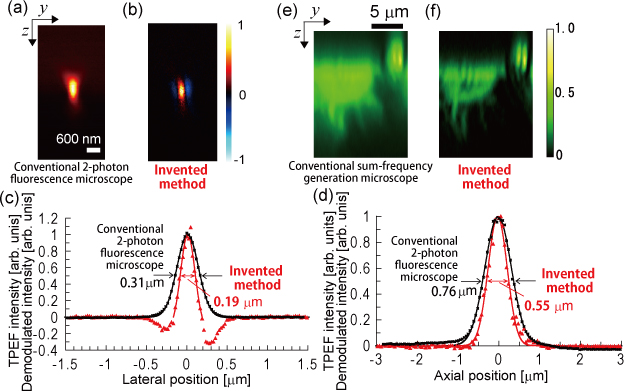 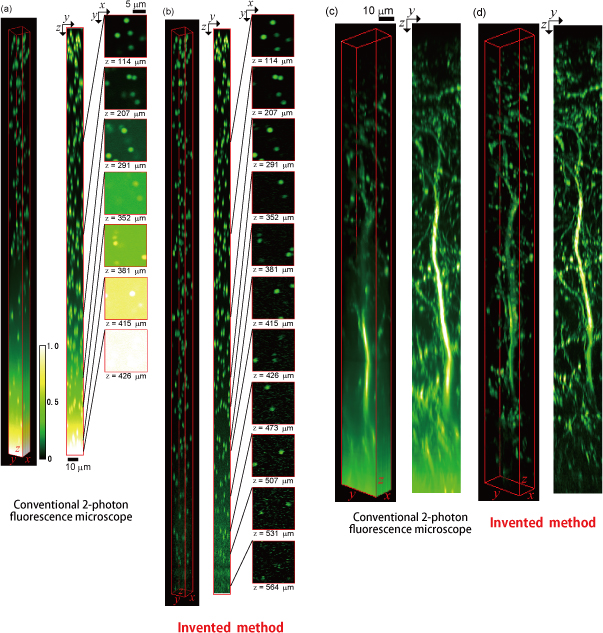