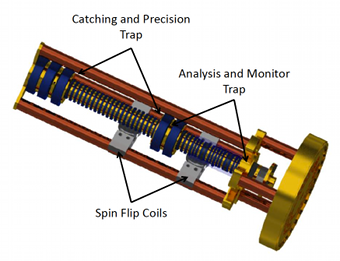 Stefan Ulmer, head of the Ulmer Initiative Research Unit at RIKEN, will lead an international collaboration at CERN in Switzerland to build a new ultra high-precision electromagnetic trap to measure the antiproton magnetic moment. Named the Baryon Antibaryon Symmetry Experiment (BASE), the new project will seek to determine if there is an asymmetry between matter and antimatter.

Matter-antimatter symmetry is the most fundamental symmetry in the standard model of particle physics. It states that if the universe were replaced with its mirror image, all matter replaced with antimatter, and all particle velocities reversed, then nothing observable would actually change.

This equivalence is captured by so-called CPT symmetry, short for charge (C), parity (P) and reversal of Time (T), no violations of which have ever been observed.

The BASE team has set out to test CPT symmetry at part per billion precision. Their new experiments will analyze antiprotons from the antiproton decelerator at CERN using a new trap called a double Penning trap, developed in collaboration with the University of Mainz, GSI Darmstadt and the Max Planck Institute for Nuclear Physics, Heidelberg.

In recent papers in Physics Letters B and Physical Review Letters, the collaboration has reported on major steps towards significantly improving the precision with which the trap can measure the antiproton magnetic moment. The trap can store antiprotons for many months, enabling them to study the antimatter particles even during accelerator shutdown.

“It’s an exciting time not only for our collaboration, but also for antimatter physics,” Ulmer says. “As our measurements of antimatter properties grow ever more precise, so does our understanding of the nature of all matter.”