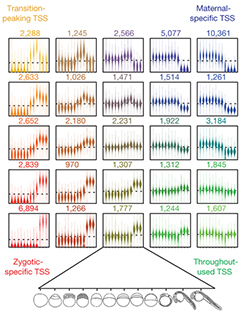 An international team of researchers including members of the Center for Life Science Technologies (Division of Genomic Technologies) has shown the existence of overlapping core promoters in the zebrafish.

A core promoter is a portion of DNA that is located next to a transcription start site and regulates the initiation of transcription.

Using Cap Analysis Gene Expression (CAGE), a technique developed at RIKEN, the researchers monitored the activity of promoters in the zebrafish during early stages of development, including the ‘maternal to zygotic transition’ during which dramatic changes in the repertoire of RNA transcripts occur.

The authors show that different but overlapping DNA sequences are recruited to act as promoters and regulate transcription, throughout development. Even genes expressed in both the oocyte and zygote contained overlapping promoters that switched depending on the stage of development.

“This is as if the promoters were words that were read using two different grammars depending on the tissue and the development stage,” explains Dr. Carninci, co-author of the study and Director of the CLST Division of Genomic Technologies.

Until now, only a few core promoters were thought to be read in a single, homogeneous way.

This finding opens new avenues for research in molecular biology and might one day help in the identification of multiple promoter grammars in health and in disease.