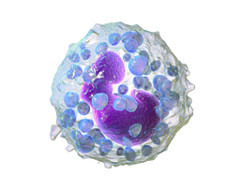 Scientists from the RIKEN Center for Integrative Medical Science, in a collaboration with the University of Tokyo and several other institutions, have helped to put in place a new piece of the puzzle of the immune system. In findings published today in Immunity, they reported that a relatively rare type of white blood cell—the basinophil—plays a key initial role in initiating the inflammation that marks the early immune response in the lung.

Understanding the mechanism of lung inflammation is important as it is a key component of asthma, which affects more than 230 million people around the world according to the WHO, and whose prevalence is rising for reasons that are poorly understood.

It is known that allergic substances known as cysteine proteases, which are found in house dust mites and papain, among other places, can trigger inflammation by stimulating the release of several cytokines—substances in the body used by immune cells to communicate—including interleukin-5 and interleukin-13. Interestingly, the researchers discovered that basophils, which are relatively rare cells, play an important role in this process, since depleting these cells from mice prevented the emergence of the inflammation. Additionally, by looking at the response in mice whose basophils were unable to secrete a certain cytokine—interleukin-4—the scientists were able to show that it is by releasing this cytokine that the basophils signal another type of cell—natural helper cells—to release the cascade of chemokines and cytokines that leads to the inflammation, which is ultimately triggered by another type of immune cell known as eosinophils.

According to Masato Kubo of the Laboratory for Cytokine Regulation at IMS, who led the study, "we were surprised to learn that basophils play this important role in the initiation of lung inflammation. It will be wonderful if these findings can be useful in identifying new therapeutic targets for allergic asthma, which imposes a severe burden on society today."