Obtaining an image of cesium in plant cells 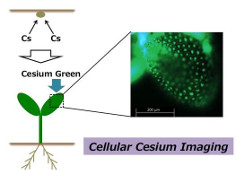 The accident at the Fukushima Daiichi Nuclear Power Plant in March 2011 led to the release of a large amount of radioactive contaminants into the environment including cesium 137, which poses a long-term threat with its half-life of 30 years. Removal of the contamination from soil has been a major headache, and finding efficient ways to complete this is an absolute priority for the cleanup of the affected areas.

A promising area of research is phytoremediation, where plants are used to absorb contaminants, dried and/or burnt to reduce the volume, and then discarded. Although considerable research has been done on selecting effective plant species or varieties for phytoremediation, there are still no prospects for practical application.

In research recently published in ACS Applied Materials and Interfaces, researchers Ryoung Shin and Eri Adams from the RIKEN Center for Sustainable Resource Science in Japan, in a project led by colleagues from the National Institute of Material Science, have successfully obtained an image of cesium distribution in a plant cell using a newly developed fluorescent tracer, Cesium Green, and the model plant Arabidopsis.

For this study, Cesium Green was sprayed onto plants grown in the presence of cesium, and the portions that contained cesium glowed in green (see photo). Importantly, this technique allows the visualization of cesium distribution to the level of individual cells, providing an extremely accurate picture that might be helpful in the determination of the precise mechanism through which cesium is absorbed and transported in plants.

In the future, it is expected that this technology will be used to rebuild agriculture in the contaminated areas, as it will aid in the development of efficient phytoremediation systems and safety guideline of the agricultural products for the consumers.