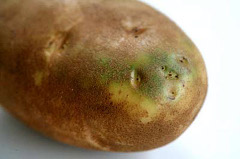 The potato is one of humanity’s most important crops, following only maize, wheat, and rice in volume of production. However, despite its popularity the potato has a downside: the presence of substances known as toxic steroidal glycoalkaloids, mainly solanine and chachonine, which in some cases can make the plants inedible. Creating varieties with lower levels of these toxins would be enormously beneficial, but up until now the pathway though which these substances are produced remained poorly understood.

Several years ago, a group of researchers from the RIKEN Center for Sustainable Resource Science, including Group Director Kazuki Saito and Satoru Sawai, decided, in collaboration with scientists from other universities and institutions, to take on the challenge of creating a safer potato, and resolved to focus their efforts on cholesterol.

Although we tend to see cholesterol as a substance limited to animal cells, where it is used in cell membranes and other places, plants in fact do contain cholesterol, just in much smaller amounts. So potatoes are not loaded with cholesterol; in fact they are low-fat items. However, the problem is that in potatoes, the cholesterol is used to synthesize the glycoalkaloid toxins. Various attempts had been made in fact to try to reduce glycoalkaloids downstream of cholesterol, and they had been partly successful though they had led to an increase in other substances that, it was feared, could be dangerous themselves.

Thus, the group decided to focus on reducing the cholesterol itself. Through painstaking studies, they discovered, in research published in The Plant Cell, an enzyme called sterol side chain reductase 2 (SSR2) which they determined was responsible for the synthesis of cholesterol in potatoes. This opened a path toward reducing cholesterol in the potatoes, consequently making them less toxic.

The next step was to test this hypothesis, to see if they could actually create a potato with a lower level of cholesterol, and toxins. They used gene silencing to create a variety of potato without the SSR2 gene, and were able to reduce the levels of toxic glycoalkaloids by about 10 percent without affecting the harvest yield of the plants.

In the future, they plan to continue to look into ways of making the potato safer for human consumption, and to use their newly gained knowledge to determine whether the same enzyme could be targeted in other plants that produce toxic or beneficial substances derived from cholesterol. So it looks like it’s not only us Homo sapiens who need to watch our cholesterol!