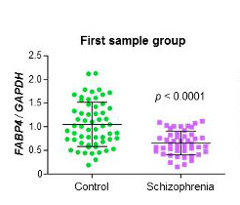 Expression of FABP4was significantly decreased in the hair follicles of patients with schizophrenia.

Hair follicles may seem an odd place to look when trying to predict mental illness, but that is exactly what Takeo Yoshikawa and Motoko Maekawa of the RIKEN Brain Science Institute, along with colleagues from a number of Japanese universities, are doing.

In fact, it’s not so odd. Brain cells and hair follicles—the organs that grow hair in humans and other mammals—are derived developmentally from a layer of the embryo called the ectoderm, which also produces the outer skin layer and teeth enamel, for example.

Dr. Yoshikawa and his colleagues were looking for a way to examine genes that have been found to be different in the brain cells of schizophrenic patients and controls, with the goal to identify biomarkers that could be used to fine whether a person might be susceptible to the disease. Looking at brain cells directly in living people would be best, but the brain is surrounded by a thick skull and it is neither practical nor ethical to drill into it to gather cells to see what genes are expressed.

Thus, in a series of studies that were recently reported in Biological Psychiatry, the team decided to use hair follicles, which are closely related to brain cells, and to see if they could be used as a surrogate for gene expression to identify people at risk of developing schizophrenia. What they found was encouraging. Indeed, the association was there, with a gene called FABP4 being down-regulated in hair follicles. This means, potentially, that they could look at the expression of FABP4 in hair follicles and recognize a susceptibility if it was reduced. They then decided to look at genes known to be associated with autism, and discovered one, CNTNAP2, which was down-regulated in the hair follicles of autistic children.