Towards presymptomatic diagnosis and prevention of Alzheimer's Disease 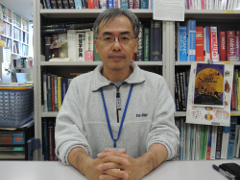 Finding a cure for Alzheimer's disease (AD) is one of today's biggest challenges. AD causes severe dementia affecting the quality of life of not only patients but also their family members. There have been numerous attempts to search for therapeutic treatments that stop or cure the brain damage caused by this disease but none have succeeded so far.

A new RIKEN venture, called RIKEN BIO Co. Ltd., Towards presymptomatic diagnosis and prevention of Alzheimer's Disease, established in August 2014, is tackling this problem by questioning the validity of the well-established animal models for AD in the field. "It turned out the conventional animal models of AD are not appropriate for a screening research process," explains Takaomi Saido, CEO of the new venture. "Instead of carrying solely genetic modifications in AD related proteins, the conventional model mouse carries extra copies of them, leading to abnormalities unrelated to AD," stresses Dr. Saido, who leads the Laboratory for Proteolytic Neuroscience at the RIKEN Brain Science Institute.

To overcome this problem, RIKEN BIO Co. Ltd. has developed knock-in mouse models which solely carry the genetic modifications found in familial AD patients and recapture the same characteristics of brain tissue damage as that of human patients. The company has provided this next-generation AD model mouse to many basic and applied research projects aiming at understanding and treating this disease.

AD involves progressive brain tissue damage accompanied by an accumulation of specific proteins called Aβ and Tau. It is now well known that these proteins start to accumulate early in the patients' life but it takes about 20 years for the symptom of dementia to emerge. If a potential population susceptible to AD can be detected and treated early enough, AD-derived dementia could be overcome. This is why the company primarily targets the establishment of early presymptomatic diagnosis for AD.

In parallel, RIKEN BIO Co. Ltd. is searching for therapeutic targets to stop the progression of AD. "We know that the accumulation of these proteins precedes the symptoms of AD. However, how these proteins lead to brain tissue damage and eventually result in the dementia is poorly understood. We believe that, using our next generation AD model mouse, we will be able to elucidate the mechanism of brain tissue damage in AD and find a therapeutic treatment to stop this process," says Dr. Saido with great enthusiasm.

RIKEN BIO Co. Ltd. has already launched collaborations with some pharmacological companies. In the area of academic research, more than one hundred collaborations have been established in the past six months. A rising venture, RIKEN BIO Co Ltd., is fully engaged to providing hope for a cure of AD in order to uphold the quality of life and dignity of AD patients and their families.