Seeing chloroplasts in a new light 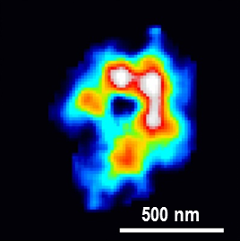 RIKEN's SACLA x-ray laser facility in Harima, Japan, is dedicated to finding new and better ways to look at things on the smallest scales, both in size and time. A group of researchers including Yuki Takayama of the RIKEN SPring-8 Center, Yayoi Inui of Tokyo University of Science and Yuki Sekiguchi of Keio University recently used the facility to take detailed snapshots of the internal structure of chloroplasts—the cell organelles that allow plants and algae to conduct photosynthesis.

Coherent x-ray diffraction imaging, the method they used, is attractive as it allows non-crystalline objects like chloroplasts to be imaged at high resolution without staining, sectioning, or chemical labeling. This overcomes the limitations of light microscopy, which cannot be used to image very fine structures, and electron microscopy, which requires samples to be very thin as the electrons cannot penetrate into cells and organelles.

The downside of the new technique is that the powerful x-rays destroy the sample at the atomic level. To get around this limitation, the researchers dispersed large numbers of chloroplasts from Cyanidioschyzon merolae, a type of red alga, on thin films, rapidly cooled them to -207 degrees Celsius to help preserve their functional structures, and scanned them with the x-ray laser beam. Diffraction patterns were obtained when chloroplasts were irradiated precisely by the x-ray laser beam, and the researchers reconstructed detailed images with a resolution of just 70 nanometers—70 millionths of a millimeter—from the patterns.

According to Takayama, "It was very exciting to see this method work so well. In the future we plan to use the technique to look at other organelles. Our hope is it will help us to understand biological phenomena by grasping, for example, how stimuli at the molecular level propagate at the level of the entire cell."

The collaboration was done along with researchers from Keio University and the Tokyo University of Science. A paper presenting the results was recently published in Plant & Cell Physiology.