RIKEN is home to the world’s greenest supercomputer

On July 31, RIKEN’s new Shoubu supercomputer won the top place in the Green 500 supercomputer ranking, giving it the title of "most energy-efficient (or greenest) supercomputer in the world." The new supercomputer, developed by RIKEN in partnership with PEZY Computing and Exascaler Inc., is known as a heterogeneous computer, as it has more than one type of "silicon brain," including regular CPU cores, many-core accelerators, and an energy-efficient software design. It runs at a speed of around 2 petaflops, and uses an ingenious cooling method, with the computer being completely immersed in liquid.

Shoubu became the first supercomputer on the list to surpass the milestone of seven gigaflops/watt (billions of operations per second per watt), a figure that represents a 33% improvement over the best performance (5.3 gigaflops/watt) recorded by the top computer in the previous ranking in November last year. According to Motoyoshi Kurokawa of the RIKEN Advanced Center for Computing and Communication (ACCC), who supervised the development project, "This is the first time since 2007, when the award was established, that RIKEN has taken the first spot. It is very exciting for us that we have been able to demonstrate our institute's commitment to building a sustainable future." It is also the first winning system developed by Japanese companies, and the first developed by a venture business company.

The announcement by the Green 500 ranking notes that, "Similar to Japan’s penchant for building fuel-efficient automobiles, dating as far back as the late 1960s, Japan also appears to be leading the charge in creating energy-efficient (or green) supercomputers." Eight of the top 20 in the current ranking, including number one, two, and three, are from Japan. Ryutaro Himeno, director of ACCC, says, "It is a great honor to receive this recognition for our extremely efficient supercomputer. We share this credit with PEZY Computing, who developed the many-core accelerators, and ExaScalar, Inc., who developed the liquid immersion cooling system. We will continue our work to further optimize the system, and then work to maximize the computer’s capability to solve real applications."

Appropriately for its design, the supercomputer is named Shoubu, a Japanese word that refers to a type of wetland plant known in English as sweet flag (Acorus calamus), which like the computer grows from water. 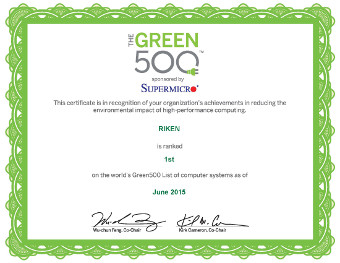 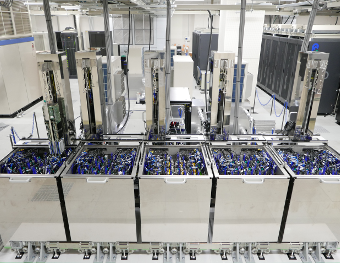