On November 25, a delegation including Korean Minister of Science, ICT and Future Planning Yanghee Choi and Institute for Basic Science (IBS) President Doochul Kim visited RIKEN’s Wako campus. During their visit, a signing ceremony was held for a general research agreement between RIKEN and IBS.

Before the ceremony, RIKEN President Hiroshi Matsumoto gave an introduction of the institute, and Minister Choi responding by expressing his hope that the delegation could learn much from the experience of RIKEN with its history going back a hundred years. He mentioned that IBS itself had been founded using RIKEN and the Max Planck Society as models, and concluded by stating that he very much hoped that RIKEN and IBS would further deepen their partnership to contribute to society and to the development of humanity. President Kim, in his address, said he was very happy that the collaboration between the two institutes, which in the past had been done at the laboratory level, could now be carried out at the institute level.

Following the ceremony, a delegation was taken on a tour of the Nishina Center, which has a collaborative relationship with IBS’s Rare Isotope Science Project. 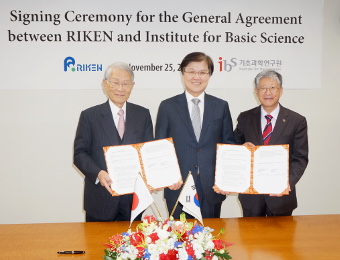 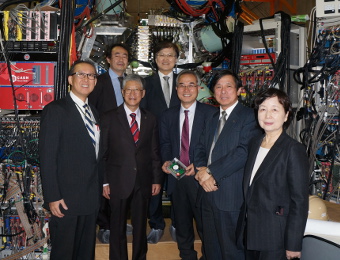