In research published in Physical Letters B, a collaboration of scientists has used the RI Beam Factory (RIBF) at the RIKEN Nishina Center for Accelerator-Based Science in Japan to show that cesium 137 and strontium 90, two major radioactive isotopes found in nuclear waste, can be transmuted into more easily managed isotopes. Using these beams, they collided the isotopes into targets of protons and deuterons—particles made up of a proton and neutron—causing the isotopes to decay into stable isotopes or short-lived isotopes that decay quickly into stable atoms.

According to Hiroyoshi Sakurai, head of the Radioactive Isotope Physics Laboratory at the Nishina Center, “Treating the nuclear waste generated by nuclear power plants and other facilities is a major problem around the world. There are two types—minor actinides, which can be dealt with using fission reactions, and fission products, for which more scientific research on nuclear reactions is needed. A promising way to solve the problem of long-lived fission products is to transmute problematic isotopes such as cesium 137 and strontium 90, with half-lives of around 30 years, which are responsible for much of the radiotoxicity of nuclear waste, either into stable nuclei that do not emit radioactivity, or into isotopes with short half-lives so that they will rapidly decay. However, there is little data on these reactions.”

Because these fission products do not capture thermal neutrons effectively, the group decided to use a process called spallation, where the collision involves high-energy protons or deuterons rather than neutrons, and to collect data on whether these fission products would react. The group decided to use a reverse setup, colliding the cesium and strontium atoms into the protons and deuterons instead of vice-versa—which might seem easier since the protons are lighter and easier to accelerate. “We decided to do this,” explains He Wang, the first author of the paper, “because it is easy to identify fast-moving reaction products, and RIBF is the world’s best facility for this kind of study.”

The group performed the experiment by creating a beam of uranium 238—the most common natural isotope of uranium—which was accelerated to about 70 percent of the speed of light by the Superconducting Ring Cyclotron and smashing it into a beryllium target, causing it to fission into isotopes such as cesium 137 and strontium 90, which were then separated using the BigRIPS device. These beams were then collided with proton and deuteron targets.

From their experiments, they found that the spallation reaction was much more effective than hot nucleus capture reaction in transmuting the two isotopes, at a rate four times higher for cesium 137 and 100 times higher for strontium 90. They also found that the reaction was 20% more effective with deuterons than protons. “We were happy to find,” says Wang, “that 89 percent of the cesium 137 atoms and 96 percent of the strontium 90 isotopes were transmuted to either stable nuclei or short-lived species with half-lives under one year.”

Says Sakurai, “We plan to continue experiments with the RIBF using a variety of reactions to find the most efficient ways to transmute problematic long-lived fission products into other nuclei. In the future we hope that this will lead to practical ways to deal with the problem of disposal of nuclear waste.”

The research was funded by the Ministry of Education, Culture, Sports, Science and Technology under its grants for nuclear power research. The research was published in Physics Letters B on March 10. 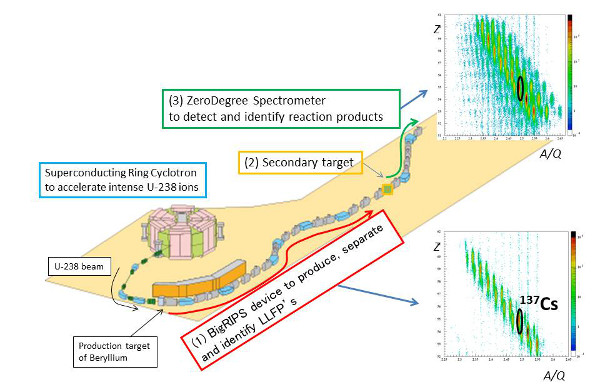 A beam of uranium 238 accelerated with the superconducting ring cyclotron was collided with a beryllium target. Different products were separated using the BigRIPS device, and beams of cesium 137 and strontium 90 were generated (1). These were then collided into secondary targets (protons and deuterons) (2), and the resulting products were analyzed with the ZeroDegree spectrometer (3).