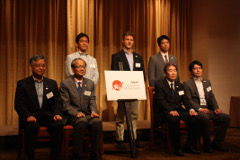 Carninci (center) at the nomination ceremony

The Japan National Tourist Organization (JNTO) has appointed RIKEN researcher Piero Carninci, who serves as Deputy Director of the RIKEN Center for Life Science Technologies, to be one of its “MICE ambassadors—a group of “influential figures in academic and industrial circles” recruited to “act as the face of the nation, contributing to publicity efforts and helping to attract more international conferences to Japan.” The term MICE stands for “Meeting, Incentive, Conference, Event,” and is used to refer to a type of tourism, like conferences, where large groups of people come into a country for a particular purpose. Carninci is the first non-Japanese to be appointed, and he joins 38 colleagues from various academic fields.

Carninci said, “It’s an honor to have been selected to this position, and I hope to use my network inside and outside RIKEN to attract researchers to Japan and contribute to its further internationalization.”