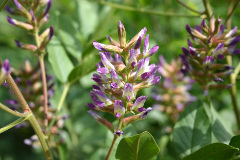 In research published in The Plant Journal, a group of scientists led by researchers from the RIKEN Center for Sustainable Resource Science in Japan have decoded the genome of Glycyrrhiza uralensis, or Chinese licorice, a plant that is important for its use in Chinese medicine and as a natural sweetener.

Chinese licorice, which is closely related to the plant—Glycyrrhiza glabra—used for licorice candy, is an important component of Chinese traditional medicine. According to Kazuki Saito of CSRS, who led the team, “It is incorporated in approximately 70 percent of the 200 major formulations used in traditional Kampo medicine in Japan. Considering that 90 percent of Japanese physicians prescribe Kampo medicine in their practices, it is easy to see the importance of this plant.”

The team chose to examine the genome of Chinese licorice rather than other related species partly because it is known to contain the highest concentration of glycyrrhizin, a compound that is associated with the medical properties of the plant, which include anti-inflammatory, anti-cancer, anti-allergic, and anti-viral activities.

To conduct the screening, they chose a strain of G. uralensis kept at the Takeda Garden for Medicinal Plant Conservation in Kyoto. Using a combination of long read and short read sequencing, and by comparing the genome to published sequences of other legume species, they predicted that the plant’s genome coded just over 34,000 proteins, a number somewhat higher than the 20,000 in the human genome. They focused in particular on two genetic regions—one coding saponins, which are important plant compounds including glycyrrhizin, and the other producing isoflavonoids, which are also known as medicinal components.

Through the research, the group demonstrated that there is a close conservation of genes between licorice and other related plants such as barrelclover (s species close to alfalfa) and chickpea, showing that legumes use a small number of genes to create “scaffolds” that allow for the production of an enormous diversity of compounds.

Keiichi Mochida, the first author of the paper, says, “Chinese licorice is an important and heavily consumed medicinal plant, and we hope that our work will make it possible to carry out molecular breeding to create strains that will grow sustainably in Japan, and which produce large concentrations of useful compounds such as glycyrrhizin.”

According to Saito, “We very much hope that our draft genome sequence will facilitate the identification, isolation, and editing of useful genes to improve the agronomic and medicinal traits of licorice through molecular breeding. There remains much to learn about the immense diversity of plant metabolism, and this research will contribute to further progress in that direction.”

The group plans to do further work to examines differences between the genome of G. uralensis and other licorice species, to further deepen their understanding of the production of useful compounds. The work was carried out by RIKEN CSRS in collaboration with a group including Chiba University, Kochi University, and Osaka University.