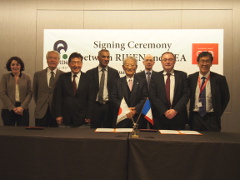 Both Japan and France are carrying out national projects for the development of next-generation supercomputers used for simulations in various areas of science. Given this, the two nations have agreed to enter into a ministerial implementing arrangement to strengthen collaboration. Under this framework, RIKEN and the French Alternative Energies and Atomic Energy Commission (CEA) have concluded an agreement to strengthen the partnership between the two in the areas of high performance computing and computational science. On January 11, a ceremony was held in Tokyo for the signing of an agreement. Under the agreement, the two organizations will enhance their collaboration in a broad range of areas including the development of open software libraries and applications as well as management issues. The ceremony was attended by CEA Chairman Daniel Verwaerde and RIKEN President Hiroshi Matsumoto. At the ceremony, both leaders expressed expectations that their institutions would exercise leadership in computational science and computer science through this collaboration.