Japanese and German scientists to collaborate for high-precision measurements

On April 8, a symposium and ceremony were held at RIKEN to commemorate the establishment of the new MPG-PTB-RIKEN Centre for Time, Constants and Fundamental Symmetries. At the new center, experimental physicists with a passion for precision will jointly tackle leading topics in fundamental physics such as the question of the constancy over time of natural constants or subtle differences between matter and antimatter. This new initiative was launched on January 1.

The symposium began with an opening talk by Professor Marianna Safronova of the University of Delaware on precision tests of fundamental physics, followed by presentations about ultra-high precision tests of fundamental charge, parity, and time invariance with antimatter, the future of ultra-precise clocks based on ytterbium ions, strontium lattices, and the thorium 229 nucleus, and the future of high-precision determinations of fundamental constants. The scientific part of the symposium was closed by Professor Yoshiro Takahashi of Kyoto University, who gave a talk on tests of gravity using cold quantum gases.

Following the symposium, a ceremony was held to open the new center, with representatives from the three institutes—the Max Planck Society, the National Metrology Institute of Germany (Physikalisch-Technische Bundesanstalt, PTB), and RIKEN—as well as Ambassador Hans Carl von Werthern of the Federal Republic of Germany.

At the MPG-PTB-RIKEN Center, world-leading experimental groups in atomic and nuclear physics, antimatter research, quantum optics and metrology will collaborate to measure time and natural constants even more accurately using ultra-precise equipment. The goal is to find answers to fundamental questions of physics. One of these questions is whether natural constants really are constant or whether they change over time by tiny amounts. Another question deals with the subtle differences in the properties of matter and antimatter (besides the reversed charge), which have not yet been demonstrated, although intrinsically they must exist. Otherwise, the universe would consist of pure radiation, since the particles of matter and antimatter created in equal amounts in the Big Bang would have annihilated. Closely related to this test of fundamental symmetries is the search for ‘new physics’ beyond the Standard Model of elementary particle physics. “Here, a unique combination of outstanding scientists has joined forces to solve these fascinating puzzles of physics“, says Klaus Blaum, director at the MPI for nuclear physics and one of the spokespersons of the Center, looking forward to this research collaboration.

The broad research portfolio aims in particular for the development of novel clocks based on atoms, nuclei and highly charged ions. In addition, improved measurements of fundamental constants such as the Rydberg constant, the fine-structure constant or the proton charge radius are envisaged. Further parts of the research initiative deal with stringent tests of fundamental interactions and symmetries using protons und antiprotons. To reach these goals, there is a need to further enhance the presently achieved experimental precision. Therefore, the researchers intend to develop novel experimental techniques, which will outperform the state-of-the-art of contemporary methods and enable measurements at even shorter time scales and with improved sensitivity. “The combined expertise of the individual groups with their partly complementary approaches and different methods has the potential for substantial progress“, emphasizes Stefan Ulmer, chief scientist at RIKEN and another spokesperson of the Center. “It is fascinating, that nowadays manageable laboratory experiments by means of high precision make it possible to investigate such fundamental questions in physics and cosmology“, says Ekkehard Peik, leader of the department time and frequency at PTB and the third spokesperson of the Center. The leaders are expecting that an essential element of synergy will arise from the intense exchange programme for young scientists, who thereby will become familiar with the experiments of the partner institutes. 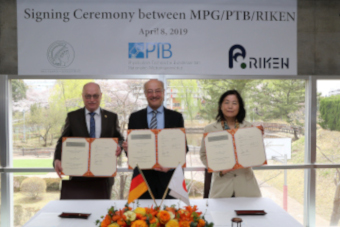 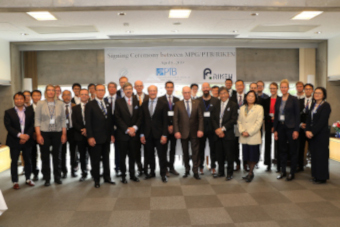