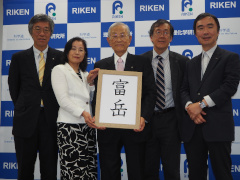 Japan’s next supercomputer may still just be a plan on paper, but as of today it has a name, Fugaku, or more formally, Supercomputer Fugaku. The new computer, which is scheduled to go into operation in the 2021 timeframe, will be up to a hundred times as powerful as the current K computer. From its base in Kobe, Japan, it will be used to help resolve social challenges in areas such as health and longevity, disaster prevention, weather forecasting, energy conservation, clean energy, material design, and manufacturing processes, along with AI and data science research and the elucidation of the fundamental laws of the universe. It is currently being developed by RIKEN together with Fujitsu.

The name Fugaku is actually another name for Mt. Fuji, the tallest mountain in Japan. The name was chosen to symbolize the power of the successor to the K computer and also to show the wide horizon that the new supercomputer will provide for its users. The name was chosen based on suggestions given in response to a call. In total, 5,181 suggestions were received, and a special committee trimmed them down to seven.