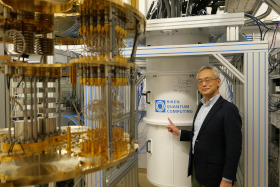 The RIKEN Center for Quantum Computing, which was established on the institute’s main campus in April, as part of Japan’s national strategy for innovation in quantum information technology, is focusing on basic research in the area of quantum information, as well as research targeted at creating quantum computing systems using superconducting qubits as well as other types of qubits.

Quantum information is an exciting area of research for two major reasons. First, researchers hope that it will lead to systems that can vastly outperform conventional supercomputers on certain difficult problems such as particle simulations. But more deeply, it is also believed that quantum information theory has the potential to provide an alternative perspective in our understanding of nature.

RIKEN is not entirely a newcomer to the field. In 2001, the Single Quantum Dynamics Research Group was established under Akira Tomomura, and a number of subsequently established laboratories continued to explore this field. Moves toward establishing the new center began in October 2020, when the laboratories working in the RIKEN Center for Emergent Matter Science in the area of quantum computing were organized into a new group, which eventually coalesced into the center.

The center is focusing on superconducting qubits, based on the work of Director Nakamura and Team Leader Tsai, and is also looking at the development of optical quantum computers led by Deputy Director Akira Furusawa, and research on hardware relating to the use of various types of physical systems including electron spins in semiconductors and atoms in vacuum. In addition, the center is pursuing software-related research, such as studies on quantum computing theory, quantum algorithms and quantum architecture. It is working with partners outside RIKEN, including Fujitsu Limited, with which a joint research center was recently established.