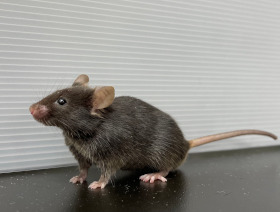 Scientists from the RIKEN Center for Brain Science (CBS) have made further steps in their work to create better mouse models of Alzheimer’s disease. One of the major goals they have is to create mice that accumulate amyloid-beta (Aβ) protein, a classic hallmark of the disease, without overexpressing amyloid-beta precursor protein (APP). In the past, the group developed a mouse model that quickly developed Aβ plaques, leading to Alzheimer disease-like symptoms, but these mice contained a mutation known as the Arctic mutation, which caused difficulties of its own. The Arctic mutation is present within the Aβ sequence and alters the structural properties of Aβ. The most recent model, described in a paper in the Journal of Biological Chemistry, avoids this. By crossing another model with mice that harbor a familial Alzheimer’s disease-causing mutation in the presenilin 1 gene, which is also associated with Alzheimer’s Disease, they were able to create mice without the Arctic mutation that developed significant amyloidosis—the deposit of Aβ with wildtype sequence—by 12 months of age. Takaomi Saido, leader of the research group that developed the new model, says, “We very much hope that this new model, as a new part of the research arsenal, will help researchers identify the root causes of Alzheimer’s disease and come up with ways to treat the disorder.” According to Hiroki Sasaguri, who worked with Saido to create the new model, “We also made an intriguing discovery with the new model. We found that microglia in the hippocampus are more active in the new model than in previous ones with the Arctic mutation. We also found that there was an increase in dense-core plaques, a hallmark of the disease in humans. We will look forward to looking more deeply into the significance of this.”

There is a more detailed article describing the new mouse model here on Alzforum. The paper itself can be found here.