A team headed by researchers at RIKEN and the Academia Sinica Institute of Astronomy and Astrophysics has uncovered details explaining the growth of galaxy clusters, the largest gravitationally-bound objects known to exist, offering new clues about the evolution of our universe.

Galaxy clusters are made up of hundreds to thousands of galaxies held together by gravity, yet the visible mass of these galaxies accounts for only a fraction of this attraction. The remainder is attributed to two sources: the intracluster medium (ICM), a superheated plasma detectable via X-ray emissions, and a hypothesized "dark matter" measureable only via its gravitational effects.

The researchers studied the ICM of galaxy cluster Abell 1689 using Suzaku, a powerful X-ray astronomical satellite developed in Japan, which they compared with observational data from the U.S. Sloan Digital Sky Survey (SDSS). Suzaku's high sensitivity enabled them to probe well beyond the range of conventional detectors, to an area at the outskirts of the ICM with a plasma temperature of 23 million degrees, within which they discovered a high-temperature region reaching some 60 million degrees (Fig. 1).

Extending outward from this high-temperature region, the researchers identified a large-scale filamentary structure of galaxies, and determined that it is a shock wave produced by the collision of cold gas from this filament with the galaxy cluster that heats the ICM. Combined with a gravitational lensing study using Japan's Subaru Telescope and the Hubble Space Telescope, the results provide a detailed picture, described in the April 9th issue of The Astrophysical Journal, of how cluster growth is affected by the large-scale structure of the surrounding universe. 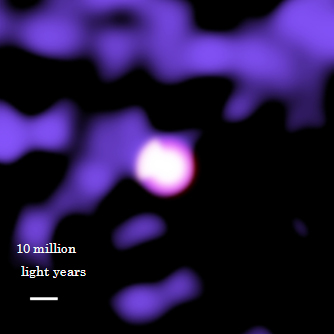 Brighter pink indicates higher temperature. The filamentary structure is found outside the cluster in the top-left direction, in contact with the hotter gas realm. The other fields in which there are few galaxies (black) contact the cooler realm. The length of the white line corresponds to 10 million light-years.