A research team at RIKEN has experimentally determined the mechanism underlying the formation of electron pairs in iron-based high-temperature superconductors. The landmark finding, reported in the April 23rd issue of Science, establishes a key role for magnetism in superconductivity.

In classical theory, superconductivity occurs when two electrons are bound together to form a pair, known as a Cooper pair, by lattice vibrations. This pairing mechanism, however, has never been confirmed for high-temperature superconductors, whose transition temperatures well above the theoretical limit of about 40 K pose an enigma for condensed matter physics.

The iron-based superconductors investigated by the research team, first discovered in 2008 by Japanese researchers, offer the greatest chance of solving this enigma. With a maximum transition temperature of 55K, these superconductors are governed by an electron pairing mechanism that is different from earlier superconductors mediated by lattice vibrations, one based on two types of electrons with different momenta.

To analyze this complex pairing mechanism, the researchers applied scanning tunnelling microscopy to electron pairing in Fe(Se, Te), the iron-based superconductor with the simplest crystal structure. Imaging electronic standing waves produced by scattering interference under a powerful 10-Tesla magnetic field, they found that Cooper pairs adopted a characteristic "s±-wave" structure that is unique to a material with two types of electrons.

The discovery of s±-wave structure breaks new ground by supporting a mechanism for electron pairing based not on lattice vibrations, as in other forms of superconductivity, but on magnetism. In providing a powerful constraint on theoretical models, the finding thus marks a major advance toward unraveling the mystery of high-temperature superconductivity. 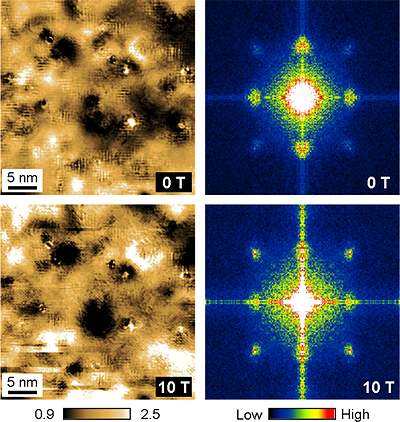 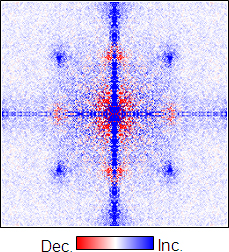 When magnetic field is applied there appear two types of spots; one is enhanced by the field (blue) and the other is suppressed by the field (red). This behavior is evidence of the "s±-wave" structure of Cooper pairs, strongly suggesting a magnetism-related pairing mechanism.