A research team at RIKEN, Japan's flagship research organization, has uncovered the first ever evidence of nuclear gene transfer from host to parasite plant species. The discovery, reported in Science, hints at a greater role for horizontal gene transfer in plant evolution.

The transfer of genetic material between non-mating species, known as horizontal gene transfer (HGT), has attracted growing attention as a powerful mechanism for genetic evolution. While common in bacteria, however, HGT is less well understood in plants, with evidence largely confined to its role in the transfer of mitochondrial genes.

The research team set out to determine whether HGT occurs between parasite and host plant species, where implications for evolution would be particularly profound. Using large-scale gene analysis, they combed 17,000 genes of the parasite witchweed Striga hermonthica, a source of devastating damage to sorghum and rice crops in Africa, for traces of transfer from host species.

One gene, ShContig9483, exhibited high similarity to genes in sorghum and rice, yet no relation to genes from Striga hermonthica's own family of flowering plants (eudicots). Using phylogenetic analysis, the team traced ShContig9483's origins to sorghum genes, strongly suggesting recent horizontal transfer from host to parasite, possibly as mRNA or cDNA.

The newly-discovered gene, which encodes a 448 amino acid protein with unknown function, occurs alongside nuclear genes in the Striga hermonthica genome, thus presenting the first clear case for nuclear HGT. The findings suggest a greater role for HGT in the relationship between parasite plants and their hosts, with deep implications for our understanding of plant evolution. 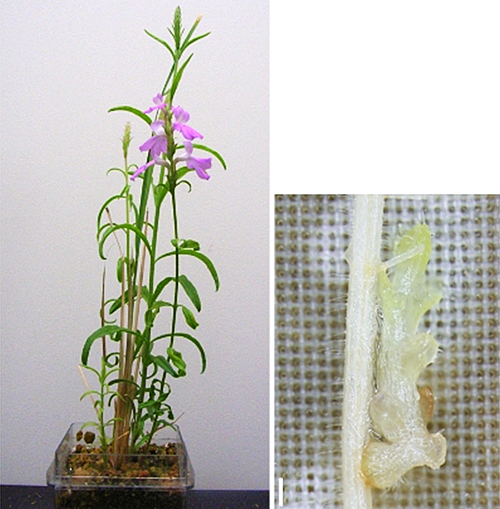 (B) Phylogenetic tree based on ShContig9483. Sorghum and Oryza (rice) belong to Poaceae. Striga and Sorghum are in the same clade. Dashed line indicates that no related sequences are found in those species.