A new analysis technique for the design and optimization of beam optics has successfully been used to model the group behavior of electron beams over a linear accelerator, paving the way for its use at linear accelerator based light source facilities around the world. The technique contributes to improved operation of the X-ray Free-Electron Laser (XFEL) under construction at the RIKEN SPring-8 synchrotron radiation facility (Fig. 1), whose intense beams will open a unique window onto the minuscule structure of molecules and the rapid reaction of chemical species.

Despite its key importance to all fields of science, the world of atoms and molecules exists beyond the reach of traditional observation techniques, holding back progress in research on everything from molecular biology to nanotechnology.

The new XFEL at RIKEN, Japan's flagship research institute, will shed first-ever light on this hidden world, delivering radiation one billion times brighter and with pulses one thousand times shorter than existing X-ray sources such as SPring-8. The XFEL facility will be only the second laser of its kind in the world when it opens in 2011.

Obtaining a stable XFEL beam, however, is not an easy task. To do so, the transverse distribution of electrons ejected from the XFEL's linear accelerator must be carefully calibrated each time conditions change to match the configuration of magnets (undulators) where X-ray laser radiation is emitted (Fig. 2). In experiments with a small test accelerator, researchers performed this calibration by directly measuring the laser intensity, but the full-sized XFEL is too complicated for this approach to work.

The new technique, developed at RIKEN and the Japan Synchrotron Radiation Research Institute (JASRI), solves this problem by rapidly and precisely computing the effect of changes in optics using information on electron beam distributions after full bunch compression (Fig. 3). By doing so, the technique plays a key role in ensuring the successful operation of the XFEL, whose intense beams promise to herald a new era of scientific exploration and discovery. 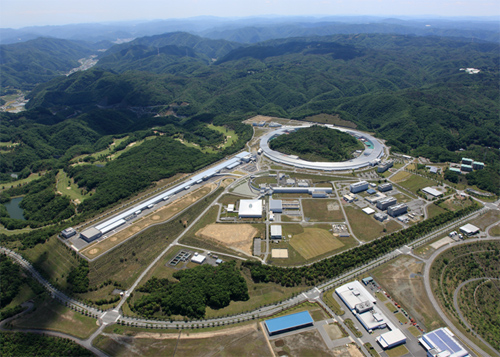 The long structure extending diagonally to the bottom-left is the X-ray Free-Electron Laser (XFEL). To its right is the storage ring of the SPring-8 synchrotron.