Researchers at RIKEN, Yokohama City University and The University of Tokyo have uncovered how gut bifidobacteria protect the body against lethal infection by enhancing the defenses of colonic epithelium. Published in this week's issue of Nature, the finding provides first-ever clues on the mechanisms underlying the beneficial effects of gut microbiota, promising more effective probiotic therapies for a variety of disorders and diseases.

In recent years, new metagenomics techniques have enabled scientists to delve ever-deeper into the world of gut microbiota, revealing the strong influence that intestinal bacteria exert on our health. Bifidobacteria, one of the most numerous such bacteria, confer to their hosts a range of beneficial health effects, aiding in digestion, boosting the immune system and even reducing cancer risk. The mechanism underlying these effects, however, has remained a mystery.

With their study, the research team set out to unravel this mystery using a combination of techniques from genetics, transcriptomics and metabolomics. Initial experiments on so-called germ-free (GF) mice, whose guts are uncolonized by bacteria, revealed stark differences between bifidobacteria strains. The researchers found that mice colonized by one bifidobacterium subspecies, B. longum, were able to survive when fed the pathogenic bacteria E. coli O157, while GF mice without the bacteria died of infection within 7 days. Another strain named B. adolescentis, in contrast, had no such effect.

By analyzing fecal metabolic profiles, the researchers succeeded in pinpointing the source of this difference in the production of acetate, which they showed enhances intestinal epithelial defense and protects against infection from O157. The key actor in this mechanism is a carbohydrate transporter encoded by genes present in certain strains of bifidobacteria such as B. longum, which enables these bacteria to utilize fructose to produce acetate in the distal colon.

As a demonstration of the power of multi "omics" technologies, the identification of these "probiotic transporters" constitutes a milestone in the study of gut microbiota. The finding also demonstrates the power of multi "omics" technologies for analyzing the gut ecosystem, promising advancements in the development of cutting-edge probiotic therapies. 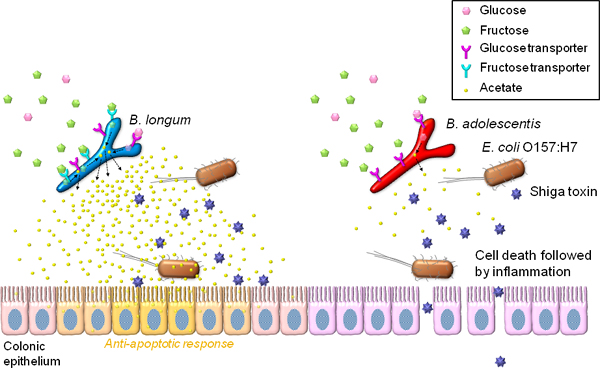 Figure 2: Mechanisms of O157 lethal infection and prevention by bifidobacteria.

Both B. longum (BL) and B. adrescentis (BA) possess glucose transporter(s) and can produce acetate from glucose in the proximal colon, where glucose is thought to be present; this acetate exerts an anti-apoptotic effect on colonic epithelium. In the distal colon, in contrast, only fructose is available, and thus only BL, with its fructose transporters, is able to produce acetate there. BA lacks the fructose transporters, and thus fails to produce enough acetate to prevent epithelial apoptosis by O157. This results in translocation of Shiga toxin into the blood stream, leading to death of the mice.