How our brains keep us focused

In a new study to appear in Neuron, scientists at the RIKEN Brain Science Institute (BSI) have uncovered mechanisms that help our brain to focus by efficiently routing only relevant information to perceptual brain regions. The results provide valuable insights on how our brains achieve such focus and on how this focus can be disrupted, suggesting new ways of presenting information that augment the brain's natural focal capabilities.

Focus on what I am about to tell you! Our complex modern world is filled with so many distractions - flashing images on a television screen, blinking lights, blaring horns - that our ability to concentrate on one thing at a time is of critical importance. How does our brain achieve this ability to focus attention?

The answer is believed to lie in two distinct processes, referred to as "sensitivity enhancement" and "efficient selection". Sensitivity enhancement corresponds to improvements in how neurons in the cortex represent sensory information like sounds and lights, similar to the volume control or reception control on a television set. Efficient selection is more like a filter, routing important sensory information to higher-order perceptual areas of the brain while suppressing disruptions from irrelevant information.

With their research in Neuron, Justin Gardner and colleagues at the RIKEN BSI set out to put these hypotheses to the test and determine which of them plays a dominant role in perception. To do so, they measured brain activity using functional magnetic resonance imaging (fMRI) while human subjects either focused their attention on a single visual location, or distributed their attention across multiple locations. To evaluate results, they used computational models about how brain signals should change based on how well subjects were able to focus their attention.

What they found was that the computational model that best captured the brain activity in the human subjects was the one in which sensory signals were efficiently selected. The model also made a prediction about what kind of stimuli are particularly disruptive to our ability to focus, suggesting that signals which evoke high neural activity are preferentially passed on to perceptual areas of the brain: stimuli with high contrast that evoke large sensory responses, such as flashing lights or loud noises, can thus disrupt our ability to focus. While shedding light on the origins of perception, the results also hint at new ways of presenting information that capitalize on increasing neural activity to help our brains focus, promising applications in the development of critical information display technologies. The findings also offer insights into the causes of common attention-related disorders such as attention deficit hyperactivity disorder (ADHD). 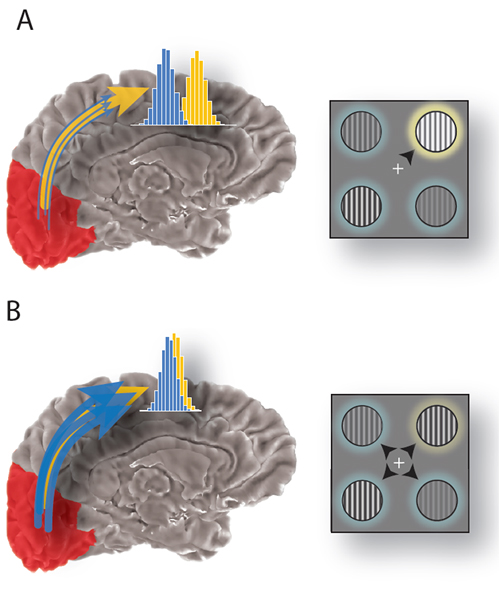 A: When subject is trying to focus attention on one target (yellow highlighted stimulus in right panel) and ignore distractors (blue highlighted stimuli), neural responses were increased in occipital visual areas of the brain.

B: When subjects distributed attention across four stimuli, signals from distracters (blue arrows) had the same magnitude as signals from the target (yellow arrow), causing both relevant and irrelevant information to be routed to perceptual areas of the brain and resulting in less discriminable neural response (more overlap between blue and yellow distributions).