Switching the state of matter

Sixty years after the transistor began a technological revolution that transformed nearly every aspect of our daily lives, a new transistor brings innovations that may help to do so again. Developed at RIKEN, the device uses the electrostatic accumulation of electrical charge on the surface of a strongly-correlated material to trigger bulk switching of electronic state. Functional at room temperature and triggered by a potential of only 1 V, the switching mechanism provides a novel building block for ultra low power devices, non-volatile memory and optical switches based on a new device concept.

After shrinking for many decades, conventional electronics is approaching quantum scaling limits, motivating the search for alternative technologies to take its place. Among these, strongly-correlated materials, whose electrons interact with each other to produce unusual and often useful properties, have attracted growing attention. One of these properties is triggered in phase transitions: applying a small external voltage can induce a very large change in electric resistance, a mechanism akin to a switch that has many potential applications.

Now, researchers at the RIKEN Advanced Science Institute have created the world's first transistor that harnesses this unique property. Described in a paper in Nature, the device uses an electric-double layer to tune the charge density on the surface of vanadium dioxide (VO2), a well-known classical strongly-correlated material. Thanks to the strong correlation of electrons and electron-lattice coupling in VO2, this surface charge in turn drives localized electrons within the bulk to delocalize, greatly magnifying the change of electronic phase. A potential of only 1 V, they show, is enough to switch the material from an insulator to a metal and trigger an astounding thousand-fold drop in resistance.

The electronic phase, however, is not the only thing that changes in this insulator-to-metal transition: using synchrotron radiation from RIKEN's SPring-8 facility in Harima, the research group analyzed the crystal structure of the VO2, showing that it, too, undergoes a transformation, from monoclinic to tetragonal structure. Electric-field induced bulk transformation of this kind is impossible using conventional semiconductor-based electronics and suggests a wide range of potential applications.

First released over sixty years ago to little fanfare, the transistor has had a dramatic impact on our daily lives, powering the electronic devices we use every day. The new switching mechanism takes this first discovery to a new level, demonstrating that a very small electric potential is enough to control macroscopic electronic states and offering a new route to controlling the state of matter. 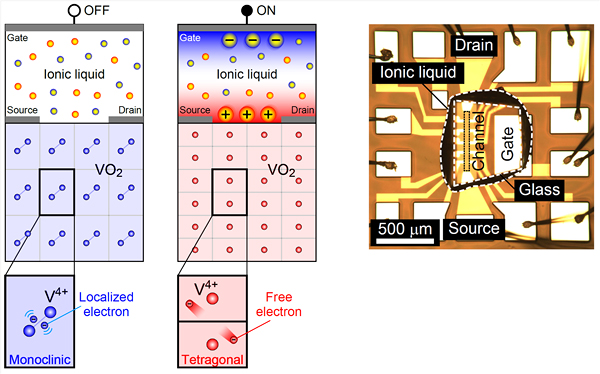 Figure 1: A schematic and an optical micrograph of a new transistor based on VO2 enabling electrical switching of the state of matter. 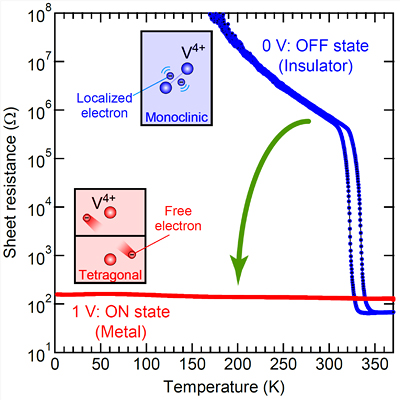