A New Route to Dissipationless Electronics

A team of researchers at RIKEN and the University of Tokyo has demonstrated a new material that promises to eliminate loss in electrical power transmission. The surprise is that their methodology for solving this classic energy problem is based upon the first realization of a highly exotic type of magnetic semiconductor first theorized less than a decade ago - a magnetic topological insulator.

Development of energy saving technologies is one of the central pursuits of modern science. From advancing alternative energy resources like wind and solar power to improving the infrastructure of the electrical power grid, this pursuit by scientists and engineers takes on a variety of forms. One focus in recent years has been eliminating energy loss in the transmission of power itself, which by some estimates consumes more than 10% of all energy being produced. The research team has demonstrated a new material - a magnetic topological insulator - that can eliminate this loss.

The work by the RIKEN/UT collaboration is closely related at a landmark discovery from the 1980s, the so-called quantum Hall effect. That effect is known to produce dissipationless electricity channels, but it requires large, cumbersome magnets to produce fields 100,000 larger than the earth's magnetic field for its operation. The RIKEN/UT collaboration circumvented this difficulty by using an exotic type of semiconductor predicted to exhibit a similar effect. In contrast to the quantum Hall effect, this effect, known as the quantum anomalous Hall effect, stems from the semiconductor's own magnetization rather than from an external one. At the heart of this new phenomenon is the interaction between magnetic ions and the topological insulator's current carrying particles (known as Dirac fermions), the latter of which are unique because they behave as if they have zero mass.

The devices produced by the RIKEN/UT team are a robust "proof of principle", demonstrating that this new type of dissipationless transport can be harnessed in prototype transistors. While currently requiring cryogenic conditions, improvements in materials design promises to improve the stability of the magnets, making it possible to operate them at higher temperatures. By doing away with external stimuli such as magnetic fields and, in the future, cryogenic cooling, these new magnetic topological insulators may represent the most efficient path to modernizing the power grid by eliminating loss in energy transfer. 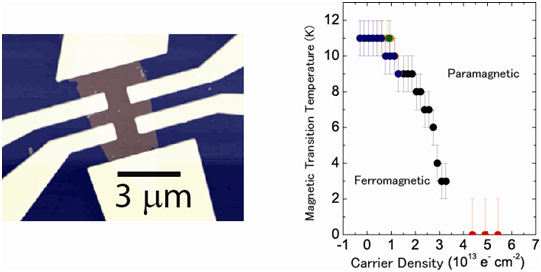 Left: The active area of magnetic topological insulator (dark gray) is 3 microns across and only 70 atoms thick. The blue background is an insulating gate dielectric and the yellow regions are metallic electrodes.
Right: The internal magnet favors the "off" state of the transistor on the left. This is evidence for a new type of magnetic semiconductor.

Figure 2: Depiction of realization of edge modes on sample surface.