The origin of the turtle shell: mystery solved

A team of RIKEN researchers has finally solved the riddle of how the turtle shell originated. By observing the development of different animal species and confirming their results with fossil analysis and genomic data, researchers from the RIKEN Center for Developmental Biology show that the shell on the turtle's back derives only from its ancestors’ ribcage and not from a combination of internal and external bone structures as is often thought. Their study is published today in the journal Nature Communications. 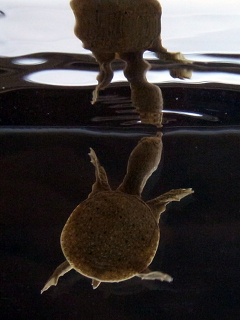 The skeleton of vertebrates has evolved throughout history from two different structures, called the endo- and exoskeleton. In the human skeleton, the backbone and bones of the limbs evolved from the endoskeleton, whereas most of the skull elements derive from the exoskeleton. Fish scales and the alligator’s bony skin nodules are other examples of exoskeletons.

The origin of the shell on the turtle's back, or carapace, was unclear until now because it comprises parts of obvious endoskeletal origin and others that look more like the exoskeleton of alligators and fish. The outer part of the turtle carapace was thought to have derived from exoskeletal bones, while the internal part has been shown to originate from ribs and vertebrae and to be connected to the internal skeleton of the animal. However, no direct evidence has been obtained to show that the bony structures developing outside the ribcage in turtles derived from the exoskeleton.

To investigate whether the turtle carapace evolved with any contribution from its ancestors’ exoskeleton, Dr. Tatsuya Hirasawa and his team carefully observed developing embryos of Chinese soft-shell turtles, chickens and alligators. In their analysis, they compared the development of the turtle carapace, the chick’s ribs and the alligator’s bony skin nodules. The researchers found that the major part of the turtle’s carapace is made from hypertrophied ribs and vertebrae and therefore derives solely from endoskeletal tissue.

This finding was confirmed by the observation of fossils of the ancient turtle Odontochelys and the ancient reptile Sinosaurosphargis, that both exhibit shells of endoskeletal origin. Odontochelys has a rigid shell instead of a flexible ribcage. And Sinosaurosphargis possesses an endoskeletal shell similar to the turtle’s under, and separate from, a layer of exoskeletal bones.

Taken together these results show that the turtle carapace has evolved independently from the exoskeleton. This scenario is also consistent with the recent phylogenetic analyses based on genomic data that have placed turtles in the same group as birds, crocodiles and marine reptiles like Sinosaurophargis, contradicting recent studies based solely on fossil record.

"Recently, genomic analyses had given us evidence that turtles evolved from reptiles closely related to alligators and dinosaurs, not from primitive reptiles as once thought. Our findings match the evolutionary history revealed by the genomic analyses, and we are about to unravel the mystery of when and how the turtle shell evolved,” explains Dr. Tatsuya Hirasawa who led the research.

“Our aim is to one day understand it as well as we understand the evolution of birds from dinosaurs,” he concludes. 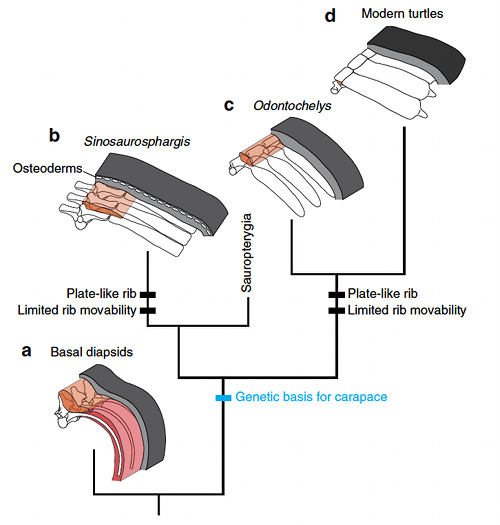