A RIKEN research team has discovered an enzyme called Rines that regulates MAO-A, a major brain protein controlling emotion and mood. The enzyme is a potentially promising drug target for treating diseases associated with emotions such as depression. 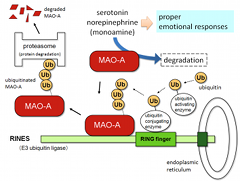 Monoamine oxidase A (MAO-A) is an enzyme that breaks down serotonin, norephinephrine and dopamine, neurotransmitters well-known for their influence on emotion and mood. Nicknamed the "warrior gene", a variant of the MAOA gene has been associated with increased risk of violent and anti-social behavior.

While evidence points to a link between MAO-A levels and various emotional patterns, however, the mechanism controlling MAO-A levels in the brain has remained unknown.

Now, a research team headed by Jun Aruga at the RIKEN Brain Science Institute has shown for the first time that a ligase named Rines (RING finger-type E3 ubiquitin ligase) regulates these levels. Their research shows that mice without the Rines gene exhibit impaired stress responses and enhanced anxiety, controlled in part through the regulation of MAO-A levels.

As the first study to demonstrate regulation of MAO-A protein via the ubiquitin proteasomal system, this research presents a promising new avenue for analyzing the role of MAO-A in brain function. Further research promises insights into the treatment of anxiety, stress-related disorders and impaired social functions. 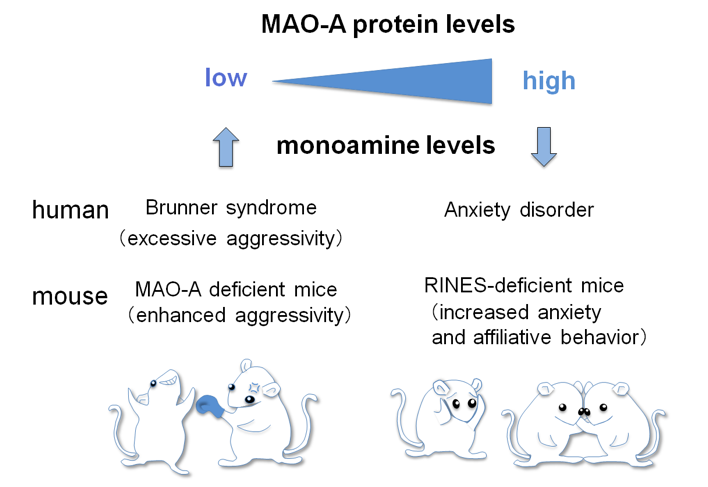