Many animals have highly developed senses, such as vision in carnivores, touch in mice, and hearing in bats. New research from the RIKEN Brain Science Institute has uncovered a brain molecule that can explain the existence of such finely-tuned sensory capabilities, revealing how brain cells responsible for specific senses are positioned to receive incoming sensory information.

The study, led by Dr. Tomomi Shimogori and published in the journal Science, sought to uncover the molecule that enables high acuity sensing by examining brain regions that receive information from the senses. They found that areas responsible for touch in mice and vision in ferrets contain a protein called BTBD3 that optimizes neuronal shape to receive sensory input more efficiently.

Neurons have a highly specialized shape, sending signals through one long projection called an axon, while receiving signals from many branch-like projections called dendrites. The final shape and connections to other neurons are typically completed after birth. Some neurons have dendrites distributed equally all around the cell body, like a starfish, while in others they extend only from one side, like a squid, steering towards axons that are actively bringing in information from the peripheral nerves. It was previously unknown what enables neurons to have highly oriented dendrites.

“We were fascinated by the dendrite patterning changes that occurred during the early postnatal stage that is controlled by neuronal input,” says Dr. Shimogori. “We found a fundamental process that is important to remove unnecessary dendrites to prevent mis-wiring and to make efficient neuronal circuits.”

The researchers searched for genes that are active exclusively in the mouse somatosensory cortex, the brain region responsible for their sense of touch, and found that the gene coding for the protein BTBD3 was active in the neurons of the barrel cortex, which receives input from their whiskers, the highly sensitive tactile sensors in mice, and that these neurons had unidirectional dendrites.

Using gene manipulations in embryonic mouse brain the authors found that eliminating BTBD3 made dendrites uniformly distribute around neurons in the mouse barrel cortex. In contrast, artificially introducing BTBD3 in the visual cortex of mice where BTBD3 is not normally found, reoriented the normally symmetrically positioned dendrites to one side. The same mechanism shaped neurons in the visual cortex of ferrets, which unlike the mouse contains BTBD3.

“High acuity sensory function may have been enabled by the evolution of BTBD3 and related proteins in brain development,” adds Dr. Shimogori. “Finding BTBD3 selectively in the visual and auditory cortex of the common marmoset, a species that relies heavily on high acuity vocal and visual communication for survival, and in mouse, where it is expressed in high-acuity tactile and olfactory areas, but not in low acuity visual cortex, supports this idea.” The authors plan to examine their theory by testing sensory function in mice without BTBD3 gene expression. 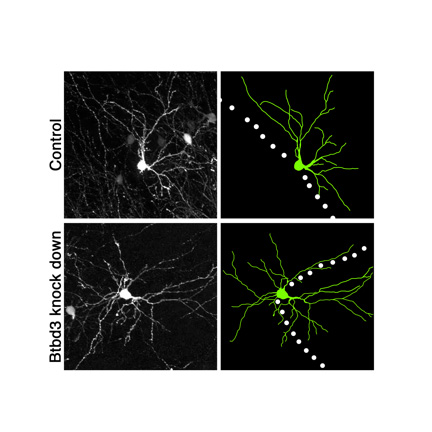 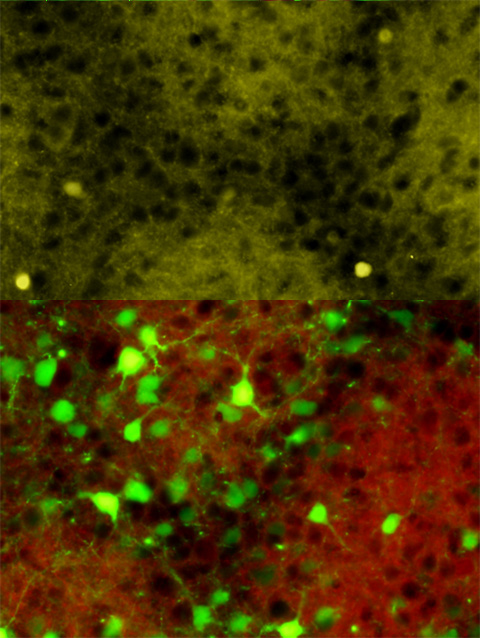